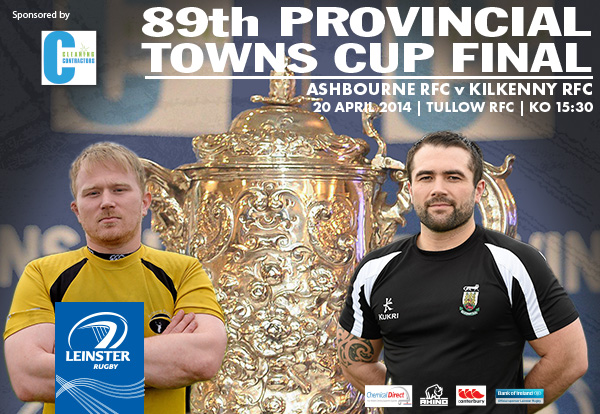 The 89th Provincial Towns Cup Final which is sponsored by Cleaning Contractors will be staged in Tullow Rugby Club’s grounds at Black Gates on Sunday afternoon at 3:30 pm and will feature Leinster League Division 1B champions Ashbourne against their divisional rivals Kilkenny…

Ashbourne enjoyed the luck of the draw early on in that their first three games were at home in Milltown House where they beat in turn Edenderry (46-14), Gorey (21-16) and Roscrea (62-0).

The county Meath club then overcame All Ireland Junior Cup champions Enniscorthy 12-10 in a tense semi-final played at Naas RFC on the same day that Kilkenny beat Wicklow 12-7 at Tullow Rugby Club in another fraught penultimate round encounter where the victors survived a frantic finale to reach Sunday’s decider.

Kilkenny opened their account with an eye-catching 20-12 away at CPL Park against last year’s runners up Longford before disposing of a pair of higher ranked Division 1A clubs in Clondalkin (17-7) and Newbridge (45-11) both at home in Foulkstown.

It is only Ashbourne’s second ever Towns Cup Final appearance having lost their only previous venture this far 18-10 to Navan at Mullingar Rugby Club in 1999.
Kilkenny on the other hand have won the fabled pot on five occasions, the most recent being in 2002 when they completed a two-in-a-row while they have also lost five finals dating back to their initial success in 1955 when they beat North Kildare 3-0 after a replay in Athy Rugby Club.

Kilkenny are backboned by a big strong powerful pack that features an athletic back row while their half back pairing of the Robby Walsh and Willie Wright is as good as there is at this level.

What makes this final so hard to call is that Ashbourne’s strength is also up front with their evergreen lock forward Jeff Mahon constantly leading by example in the trenches while they also feature a game controlling half back duo in Gavin Kennedy and Paul Morris.

It promises to be an extremely tight contest between two evenly matched teams before an expected huge crowd at Black Gates. Tickets are available on the gate and are priced as €;10 for adults and €;5 for students with a valid student I.D. card.

In an exciting development, the IRFU will be streaming the Provincial Towns Cup, sponsored by Cleaning Contractors live worldwide for the second year in a row and the link can be found here.

If you are attending this historic clash on Easter Sunday, check into the match on Facebook here.