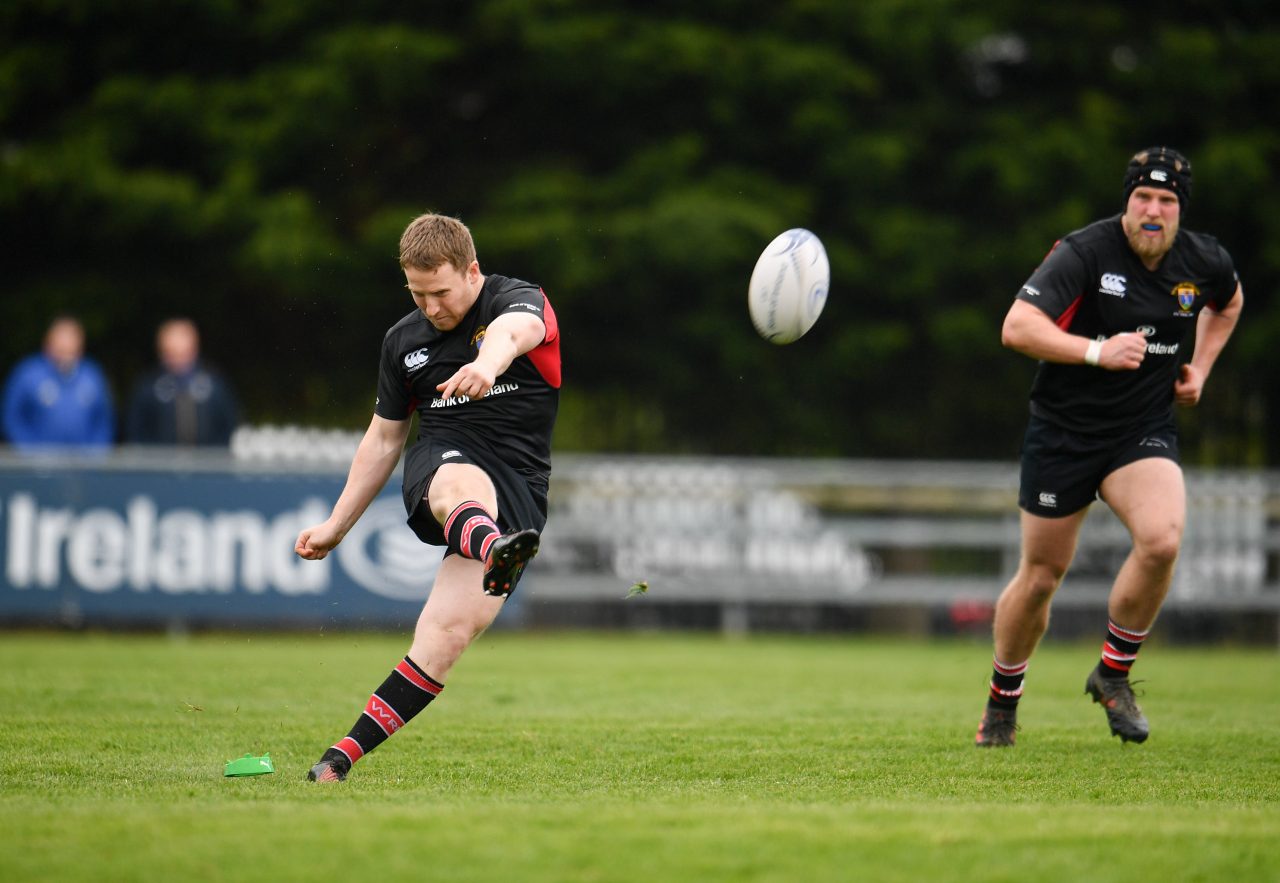 The first round of  the 2020 Bank of Ireland Provincial Towns Cup took place around the province yesterday.

Eleven fixtures were played, with Wexford Wanderers receiving a walk over from Midland Warriors, as Ashbourne, Dundalk, Kilkenny and Gorey were awarded byes into the second round.

Edenderry came-from behind to outdo their guests North Kildare at Coolavacoose. This was a curious game in which all four tries came against the elements, Kildare forging a 14-3 lead at the interval.

They looked to be on course for the second round when tries from lock Mark Farrell and full-back Paddy Casey-Dunne in the sixth and 39th minutes, respectively, were converted by outhalf Robbie Waters.

That calculation would have failed to take into account the spectacular try by wing Stephen Moore which was converted by Stephen Gill. Patience was the key to Edenderry completing their mission as second-row Brian Holt’s pick-and-drive did the trick in the 68th minute.

Roscrea led from start to finish to see off Balbriggan at wet and windy Streamstown. Their forwards got on top from the get-go to help them to an 11-10 lead against a try by Balbriggan’s Conor Caldwell and five points from the boot of Paul O’Connor.

When Roscrea added on a converted try, they had a valuable two-score lead and it was decisive, despite another penalty from Paul O’Connor.

Mullingar were impressive in how they dominated Boyne 36-5 to make it beyond the first round for the first time in 10 years at Shay Murtagh Park. They carried their league form into the cup, building a 10-0 lead at the breakthrough the exploits of their outhalf Mitchell Millar.

Boyne were never really in it, despite the best efforts of full back Graham McQuillan and lock Richard Shuttleworth, their only consolation coming from a late try by flanker Ben Dunphy.

The ice-cool kicking of Niall Earls was the difference as Wicklow overcame Cill Dara 9-5 at Silken Thomas Park.

The home side had the better of the argument for long stretches without getting any further away than a try by No 8 John Joe McIlwrath on the half-hour with the wind at their backs.

Wicklow began to turn on the power in the last quarter, forcing penalties from indiscipline and outhalf Earls was able to make them pay three times, the clincher coming in the 76th minute.

It took a 74th-minute try by No 8 Ben Kavanagh and conversion from Shane Nalty to see Arklow through 18-17 against Skerries at The Oval.

It was a testament to the character of the home side that they didn’t get too frustrated when Skerries hit the front from Ruairi Woods’ breakaway try, converted by Oisin McKee, in the 67th minute.

It was the scrum and maul that did the bulk of the damage against the Skerries outfit, containing eight Under-20s, and the loss of captain Colin Doyle to the bin was just too much to bare late on for the Dubliners.

It took captain Gavin Doyle’s late try, converted by Billy Doyle, for Athy to finally shake off New Ross 17-10 at The Showgrounds. It was all about starting fast from an early try by wing Tom Glynn and finishing strong as Glynn’s second was good enough for 10-5 at the break.

This was a real tit-for-tat affair and New Ross will regret the chances missed as much as those taken by second row James Fitzgerald and left wing Aaron Fenlon.

The  All-Ireland hierarchy came to fruition as Division 1B Naas overpowered 2C Tullamore 49-0 at Forenaughts.

Wing Ruairi Cleary took the plaudits with a hat-trick of tries as flanker Evan Coyle and second row Phillip Jordan excelled up front. The Offaly club just struggled for any sort of fluency and could never establish a foothold in the game.

Captain Robin Foot’s Portlaoise had far too many weapons for Enniscorthy at Alcast Park. Flanker Foot and wing Cormac Doyle each bagged a brace of tries to account for half of their eight tries as the scrum was the main source of their dominance.

The holders simply could not compete, even though second row Joe Carley and flanker Luke Cummins did what they could.

Marksmen Colm Glynn and Ian McCormack shot Longford to a 24-11 victory over Navan at Balreask Old. The winners took control from tries by Finbarr McGowan and Podge O’Farrell allied to the goal-kicking of Ryan McHugh to lead 18-6 at the break.

It could have all been wasted when Navan punched in a try by Paddy Fox and had another disallowed for crossing going into the last 10 minutes.

However, Glynn snapped a drop goal and McCormack had to do likewise when the ball was blown off the tee on approach to a penalty attempt.

Scrum domination was the order of the afternoon as Tullow ground down Newbridge at Blackgates. The home side settled well, prising the visitors’ defence open for tries from wing Ryan O’Neill and two from No 8 Stephen Smyth in the first-half.

Newbridge’s young guns will learn a lot from this, fighting back from an imperfect start for full-back Karl Darragh to pick up their try and penalty to make it close at half-time.

They just couldn’t cope at the set-piece where Tullow got on top, try-scoring replacement James O’Brien making an impact and Paul Canavan kicking the goals.

County Carlow were made to fight every minute of the way before Richie Whyte’s penalty sealed the deal in the last minute at Oak Park. Carlow’s Larry McGrath and Clondalkin’s Chris Jebb exchanged tries in a well-contest first-half which ended as it had started, all-square (7-7).

Clondalkin edged ahead from a penalty by outhalf Jebb and were looking likely to hold on to it or increase it.

Carlow had to wait until the 70th minute to strike back from replacement outhalf Fionnan Burke’s try, Whyte adding the conversion and the insurance penalty.

Wexford Wanderers were given a walkover by Midland Warriors while first round byes were awarded to Ashbourne RFC, Dundalk RFC, Kilkenny RFC and Gorey RFC.

Second round fixtures will be played on Sunday, 15 March.