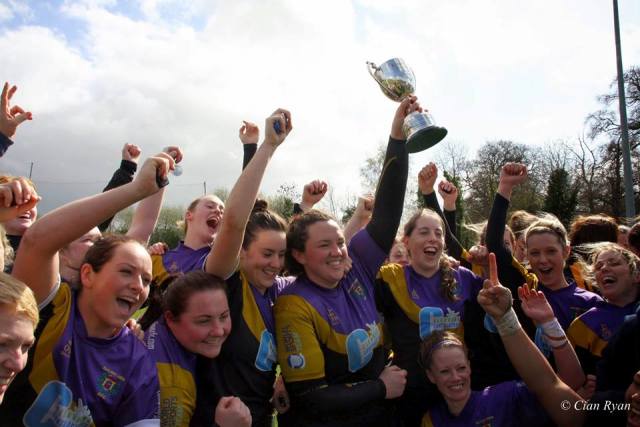 The Women’s 1sts claimed the All Ireland League Division 2 title in style in Naas on Saturday, running out 51-17 winners against Ulster champions Cooke…

Railway started strongly and raced into a 17-0 lead with two tries from Julie McGrath and one from Lava Leitula after 15 minutes. A yellow card didn’t help the Railway cause and Cooke scored two tries of their own, either side of a Nicole Fowley try to leave the half time score at 22-12.

Cooke came out in the second half with all guns blazing and put immense pressure Railway. A second trip to the sin bin left Railway down to 14 yet again. Cooke’s Irish International Grace Davitt was supreme in exploiting the extra space afforded and sent a magnificent crossfield kick for the Cooke right winger to dot down in the corner to leave the score 22-17 and put the pressure on Railway to respond.

Railway increased the pace of the game to score five further tries from Kim Flood, Emma Murphy, Claire Ryan and two from Fowley, which gave the scoreline a flattering look that did not fairly reflect the contest or the efforts of a tough and talented Cooke side.

It was a strong performance all round, where Railway’s forwards set a strong platform for the backs to attack. Front rows Jude Cleary, Shirley Corcoran, Lucy O’Sullivan and Debbie Kelly had the Railway scrum in the ascendancy all day and worked tirelessly around the park. Aoife Maher carried strongly and choke tackled at will, whilst Melissa Slevin and Sarah Cranley were dominant out of touch and their usual destructive selves in open play. Cranley’s fellow backrow colleagues Abigail Donnelly, Lava Leitula, and Aine Lucey, aged 18, 20 and 21 respectively, were excellent in all facets and are destined to have big futures in the game.

This platform allowed the backline to score eight tries and they were well serviced by half-backs Jess O’Mahony and Mere Baker. Centres Fowley, Flood and Ryan were running threats all day and outside backs Murphy, McGrath, and Eimear Flannery provided the speed and elusiveness.

Railway captain Aoife Maher paid tribute to the support on the day: “It was big day for us and we were very nervous beforehand but our support on the sideline was fantastic. It means a lot when you look up and see the Club President, the Club Captain, and players from all of our Men’s teams, Women’s teams, Men’s U20s and Girls U18s, as well as friends and family, cheering you on. I’m consistently amazed with the support we get from the club, it really is an integrated club and today felt like a real club day.

“I’d also like to thank our Head of Player Welfare, Professor John Ryan and Ian Marshall, who were match day doctor and physio for us today, as well as their – and Redmond O’Mahony’s – work with us all season. Our manager Mick O’Gruigain has been a huge addition too.

“Our coaches Mere and JC (John Cronin) have been excellent and are the best coaches I’ve come across at any level. They push us, drive us and have us aspire to play a good brand of rugby.

“Finally, my team-mates have been a committed and hard-working bunch all season. We played 39 players in this league campaign, which shows the importance of our squad, and this is a victory for all of our players, not just those who were lucky enough to play in the final. We’ve been going since July, so we’ll take a few weeks off now and enjoy the Kinsale 7s and our club dinner dance, before we starting thinking about 7s and pre-season and Division 1 next season.”

The Division 2 title caps a remarkable rise for Railway’s Wmen’s team, who have now qualified for AIL Division 1 next season, as this is just the team’s second season.

Photos of the match are now on the Railway Facebook page.