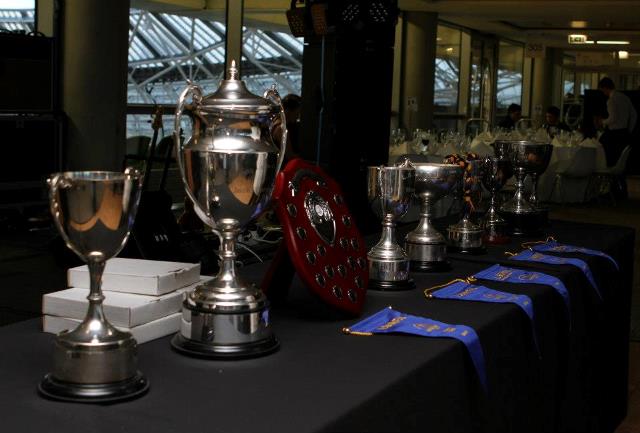 Railway have won an amazing fourteen trophies in two seasons, ten of them Leinster Pennants. Even more amazingly, every single team in the club has won at least one trophy…

There were big celebrations at Railway Union’s Annual Ball earlier this month when 170 people gathered in the Davenport Hotel to cap a fantastic season.

“One of our core values is that all players in Railway are equal, regardless of which team they play on, their ability, their background or their gender.  There is no ‘hierarchy’, all teams and players mix together freely, and all teams get equal support from the club to achieve their goals.”

“My three-year Presidency has been a wonderful journey,” said Roche.  “When I started in 2011, we had barely one Men’s side and only sixteen active players.  Since then, our growth has been phenomenal.  We’ve registered over 150 adult male players in three years and over 100 adult female and 140 age-grade players in just eighteen months.  The IRFU and Leinster Branch have been hugely supportive and their guidance has been invaluable.  I also had a fantastic committee and team of people behind me that have allowed us to achieve what we have.”

“Our Director of Rugby, John Cronin, has been instrumental in the turnaround.  He came in, set the vision for club and went about developing the players, coaches and management teams to achieve that vision.  He has installed a culture of success and belief across the whole club that we just didn’t have previously and that’s been reflected in these club-wide results.”

“It’s not just about winning either,” said Roche. “Due to our ‘one-club’ philosophy, we’ve a very vibrant social scene.  We tour as a club, be it overseas or our annual trip to the Kinsale 7s, and there is generally an organized social event at least every month, in addition to the usual ad-hoc nights out.”

Roche said the club are continuing to develop and build.

“Our Player Welfare focus, led by Leinster Team Doctor Professor John Ryan, is second to none.  We spend a huge amount of time working on the well-being, physical development, and functional fitness of our players.  We’re moving that on a level now and are in the process of building a state-of-the-art rugby-specific gym and medical room.  This will allow our players to become fitter, stronger and faster athletes and, therefore, better rugby players,” said Roche.

“All our teams want to kick on next year.  Our Women’s 1sts are in AIL Division 1 next season and will be aiming to make an impression there.  Our Men’s 1sts have jumped two divisions in three years in the Leinster League and want to continue their progression up the divisions.  We have a number of very talented players coming out of our Men’s U20s and Girls U18s who’ll be looking for places in our senior sides and they’ll continue to drive success across all teams there.”

“And our doors are always open for new members,” said Roche, “We have players from almost every school in Dublin and every county in Ireland.  It’s a very friendly, welcoming and open club and a great place to find your feet.  If you are moving to Dublin, leaving school and looking for a club, or simply looking for a new challenge, you’ll find a home in Railway.”