Reeling in the Years with Rala… 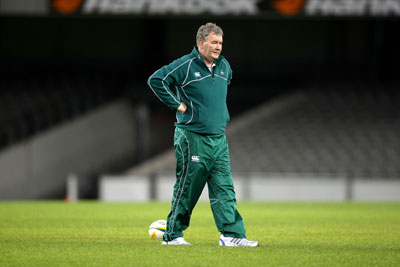 Rala, aka Paddy O’Reilly, Irish bag-man extraordinaire has a busy month ahead taking care of all the needs of “his lads” in the Ireland squad…

However, as ever with Rala, he is also planning ahead and thinking of others.

Rala is organising a great re-union, in his old club Terenure College RFC, of teams and players from the 1960’s, 70’s and 80’s. Senior or Junior teams, front-row clubs, back-row combinations, front-five units, flying back-lines, hurlers-on-the-ditch, and supporters – whatever the combination or the memory, Rala wants as many as possible to assemble on Friday, 3rd December in the Clubhouse for a night of reminiscence, chat and a shared glass or two.

Michael “Mossie” Walker (mossiewalker@gmail.com) and his committee are pulling it together whilst Rala tends to Irish duties over the next month and they are very hopeful of getting a unique crowd of fellas who spent a lot of time together, sharing the lumps and bruises and wondering whether the future could ever be as much craic as the present. The emphasis of the night will be on “old times and good times” and the night will focus on those friendships of years ago.

So, whether you were one of the club players or members during those glorious Senior Cup wins of ’66 & ’67, or one of the players or supporters in the extraordinary year of seven finals in the Presidency of PI Lyons, or one who saw or took part in the five Junior League successes in the ‘70s, or one who celebrated that unique Leinster League win in the 80’s, make contact now and book your tickets (an all-ticket affair, but at only €;25 for food and drink).

As with the great club celebration of Girvan Dempsey’s career this time last year, this is another great idea from Rala, the ultimate club-man who understands the importance of friendship and brotherhood in the unique culture of Club rugby.