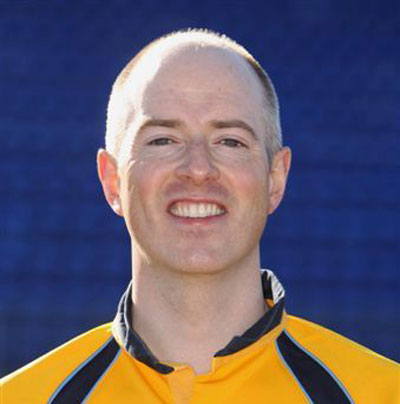 Following five years of refereeing all grades of club rugby in Leinster, he was selected for the IRFU national panel in May 2009.

Ed refereed his first game in March 2004, a friendly between Lansdowne and the Scottish club Madras. He has benefited from the development structures within Leinster Rugby Referees and says: “I’m grateful for the excellent coaching input and the opportunities provided to referees within Leinster. Regular law seminars and assessment of a referee’s performance gives each referee the chance to perform to the best of their ability.

“Senior referees are always willing to help out and I’ve been lucky to receive coaching from Alan Lewis and in particular Donal Courtney”.

Last season, Ed refereed fixtures in the All Ireland League (AIL), AIL Cup and AIL Junior Cup. The highlight was his first IRFU appointment, an AIL Cup game between Sundays Well and Malone. Ed recalls “My first AIL Cup fixture was a great experience. Stepping up to the next level always presents a new and exciting challenge for a referee”.

This season Ed continues to referee in the AIL. He refereed Connacht v Ulster in a Schools interprovincial in September and was also appointed 4th official for the Magners League fixture between Munster and Leinster in the Aviva stadium in October.

He adds: “I would recommend refereeing to anyone who has an interest in staying involved in the game. It’s a decision you’ll never regret”.