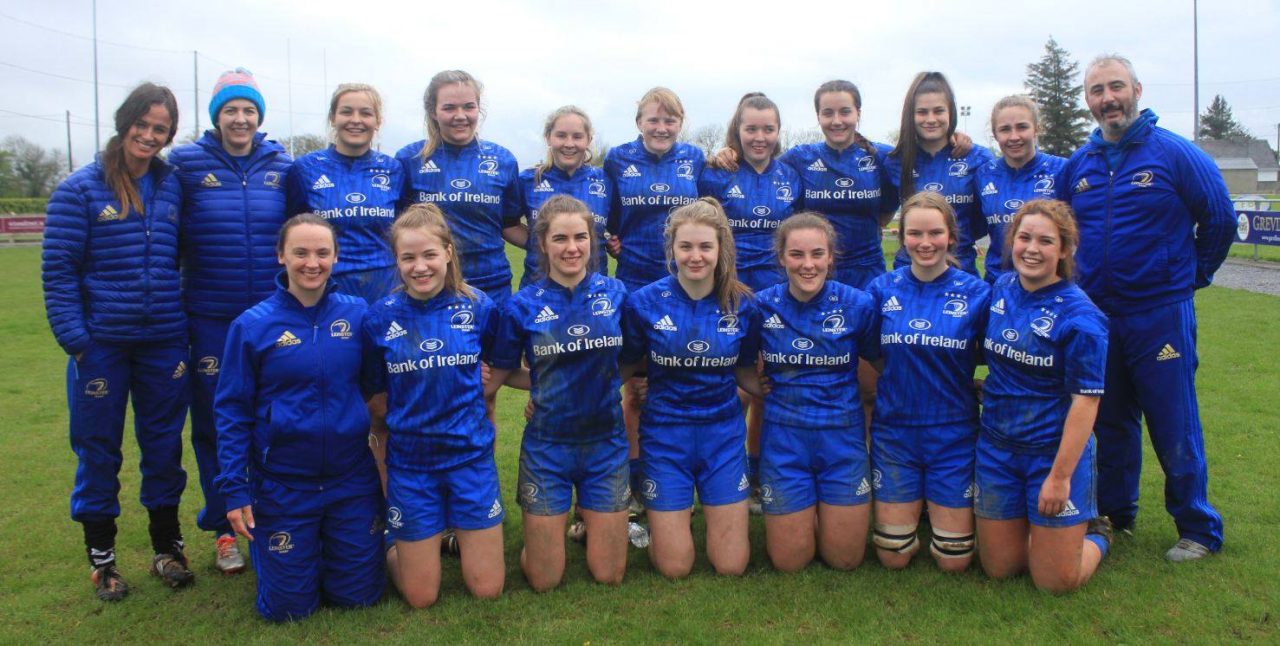 The Leinster Rugby Under-18 Girls had a clean sweep over the weekend at the IRFU Inter provincial 7s Series in Mullingar RFC with three wins from three.

Munster provided the opposition in the first match and for the opening six minutes it looked likely that the girls in red would take advantage of what turned out to be a nervous start for Leinster.

Some handling errors and unfortunate turnovers kept Munster very much on the front foot and with the majority of possession, they looked the most likely to cross the whitewash and indeed this was the case and they took a well deserved 5-0 lead into the break.

The second half was better for Leinster. Confidence had returned to the squad and a superb Emma Kelly breakaway try from 40m and a Kate Farrell conversion gave Leinster the lead, 7-5, however Munster responded immediately to score what looked like the winning try with only two minutes left on the clock 10-7.

Up stepped Ellie Meade though, who put in a tremendous tackle, overturned the ball and released the speedy Vicky Elmes Kinlan who was not going to be stopped on her way to score under the posts from the half way line, the conversion was good from Ava Jenkins 14-10 to Leinster, the decisive score was greeted by the full-time whistle.

It was Connacht in the second match and Leinster were very aware of the dangers posed by their talented backline. Leinster knew they would have to step up their game and this they did.

For four minutes the game was anybody’s, however Leinster settled better and following a good series of phases back and forth, the stretched Connacht defence was finally breached and great passing saw Lily Moran gather and race home for her first of a brace, the second coming only one minute later as she showed immense power to force her way over.

Vicky Elmes Kinlan scored soon after the restart with what is now a trademark breakout try from inside her own half to end three minutes of scintillating play from the girls in blue. 15-0 Leinster at the break.

Connacht started the second half better and caught Leinster napping. The impressive Beibhinn Parsons circumnavigated her way around the defence to score under the posts for a converted try.

Indeed only moments later it looked like Connacht were in again only for the no less impressive Aoife Wafer to produce the first of two astonishing try saving tackles of the series which led to a turnover and Emma Kelly dashing over for her first of the day giving them a 20-7 lead.

Aoife wasn’t just content with her defence and decided to show her attacking prowess one minute later to score a super try under the sticks, converted by Beth Roberts. Leinster finishing the contest 27-7 winners.

Leinster were two from two now and were pitted against Ulster (the only side to defeat them this 7s season) and it had the feel of a grand final.

In a low scoring, fast, breathless, end-to-end affair, both the Leinster and Ulster girls gave everything they had left in the tank after a fiercely competitive four province IRFU 7s Blitz.

It wasn’t until the final play of the half that the deadlock would be  broken. Lauren Patterson seized her moment and outstripped the Ulster defence to score.

The second half was only a minute old when Leinster once again produced the goods and it was Vicky Elmes Kinlin who completed her hat-trick of tries for the day to give Leinster a 10-0 advantage. For the next six minutes, Ulster played some superb 7s and but for some tenacious tackling would have been right back in this contest.

The tackle of the day arrived in the last moments when Ulster intercepted on the half way line, sped towards the uprights only for Caoimhe O’Callaghan to chase down and deny what appeared a certain score. The tackle was textbook and her never give up attitude reflected that of the entire Leinster squad throughout the day.

It was a very encouraging day in Mullingar for the Leinster Under-18 Girls winning three from three under the gaze of Anthony Eddy, IRFU Director of Women’s and Sevens Rugby.

Head Coach Niall Neville was delighted with the effort and performance from everyone of his squad and praised the IRFU development pathway, including the Give It A Try initiative, GX7s in the schools, Area League blitzes and IRFU Inter-provincials that has seen a spike in the numbers playing and therefore a larger pool of talent that will, hopefully, go all the way to play for both Leinster 7s and 15s and maybe beyond in the near future.