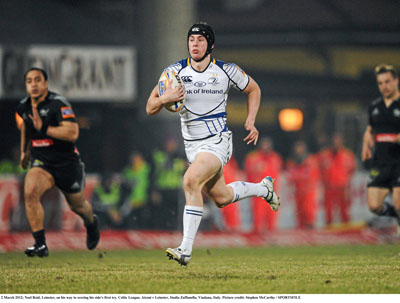 Three penalties from out-half Madigan gave Leinster a 9-0 advantage at the end of a closely-fought first 40 minutes at the Stadio Zaffanella.

Aironi stayed very much in the hunt with second half penalties from Naas Olivier and his replacement Luciano Orquera, but Leinster lifted the intensity to set up two more three-pointers from Madigan.

They also picked off the game’s only try for good measure, with young replacement Noel Reid running in an intercept effort for his first senior score in Leinster colours.

Madigan converted to complete his 17-point tally as Leinster equalled the all-time league record of 14 matches without defeat, which was set by their arch rivals Munster in 2011.

Joe Schmidt’s men took early lead in Viadana thanks to a fifth minute penalty from Madigan, who split the posts after some direct play from the forwards.

Naas Olivier was off target with a long range attempt to reply, and Madigan also narrowly missed a penalty from the left after Tito Tebaldi infringed.

Both sides showed an eagerness to move the ball wide and the visitors’ back-three, led by the returning Luke Fitzgerald, had a busy opening quarter.

Scrum half Tebaldi evaded a tackle and slalomed towards the Leinster try-line, but the men in white scrambled well to force a penalty at the breakdown.

With the province’s fans making their presence felt, a well-executed maul drive and further carrying from Heinke van der Merwe and captain Shane Jennings got Leinster into scoring range.

Aironi duly fell 6-0 behind when Madigan punished prop Lorenzo Romano for a high tackle on the advancing Eoin O’Malley.

Running from deep, Fionn Carr was close to linking up with the supporting Fitzgerald as he had wormed his way through the Aironi midfield on a trademark burst.

It tough some rugged defence from the Italians to keep an improving Leinster out as half-time approached. Rhys Ruddock and Damian Browne barged up over the gain-line, but a steal five metres out lifted the pressure off Aironi.

Leinster’s efforts were rewarded though with a late penalty goal from Madigan who had a little help from the left hand upright.

Aironi enjoyed a good spell of possession when the second half got underway, and four minutes in Olivier landed a penalty from in front of the posts.

A crisply-struck penalty from Madigan, just inside the Aironi half, went the wrong side of the right post as Leinster tried to hit back in the 52nd minute.

Aironi also showed a willingness to attack from deep with full-back Giulio Toniolatti making a brilliant break in midfield, however replacement Salvatore Perugini fumbled the pass.

From the ensuing scrum, Leinster attacked out to the left and O’Malley went through a gap. Fitzgerald and Carr were up on his left shoulder, but they ran out of space with Riccardo Pavan doing well to haul down Carr.

The home crowd roared their approval as Aironi put together a sustained run of phases in and around the Leinster 22. An offside decision went against the visitors and replacement Orquera closed the gap to 9-6 with the resulting penalty.

Into the final quarter, it took some disciplined defending from Leinster to hold Aironi at bay as they went in search of the game’s opening try.

Starved of territory, Leinster suddenly surged forward on the back of a series of direct runs from the hard-working Andrew Conway and replacements Dominic Ryan and Leo Auva’a.

The end product of that was Madigan’s fourth successful penalty, punched over from close range.

Aironi had to see out the game down to 14 players after replacement Gilberto Pavan was yellow carded for a dangerous tackle on O’Malley. Madigan followed up with the three points to give Leinster a match-winning cushion.

And the victory was sealed with five minutes remaining when Reid intercepted a pass near his 22 from Orquera, and the 21-year-old Academy player had the pace to sprint over halfway and in under the posts for the clinching seven-pointer.

The league leaders also had a player sin-binned in the closing stages, with replacement prop Jack McGrath seeing yellow for tackling Tyson Keats without the ball.