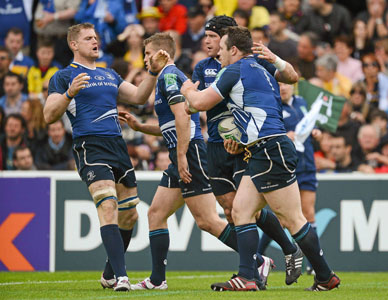 The defending champions needed all of their experience and defensive clout to stave off the French side whose centre Wesley Fofana blew a late try-scoring chance.

A crucial tackle from Gordon D’Arcy did just enough to force a knock on from Fofana as he went to touch the ball down, and Leinster survived a furious last-ditch onslaught from the first-time semi-finalists.

Four well-struck penalties from Brock James eclipsed Jonathan Sexton’s first half brace as Clermont Auvergne went in at the break with a 12-6 lead.

But Leinster stormed ahead with a stunning ten-point swing at the start of the second half. Rob Kearney was central to it, setting up a 42nd minute try for Cian Healy, finding a terrific touch and then smacking over an inspirational long range drop goal.

That purple patch gave Joe Schmidt’s men a four-point advantage and they tightened their grip on the game into the final quarter, with Sexton replying to James’ fifth successful penalty.

But despite dominating for much of the second half possession and territory wise, the province still had to ride out a nerve-jangling spell camped near their try-line in the dying minutes.

It was all hands to the pump as Leinster’s disciplined and well-organised defence eventually sealed a hard-earned victory in the pressure-cooker atmosphere of the Stade Chaban-Delmas.

This memorable semi-final win has teed up an historic all-Irish decider between Leinster and Ulster at Twickenham on Saturday, May 19. The result has also guaranteed Heineken Cup rugby for Connacht next season.

Speaking afterwards, Leinster head coach Joe Schmidt said: “Jonny Sexton spoke of course (at the break) and called the play that we did right after half-time. He said let’s do this play, let’s get it dead right and we’ll score from it.

“So anyone who doubted at half-time was pretty quickly in full agreement with Jonny when he knocked over the conversion (of Cian Healy’s try) as well to give us a one-point lead.

“Clermont made it pretty clear during the week that they weren’t going to let us have the ball to play with. They’d been reasonably outspoken about that and I thought they did a pretty good job of it.

“We were surviving on scraps a little bit and that’s always frustrating because we want to be able to set up the way we play and play to it.

“We talked about the scrum and the lineout at half-time, making sure we got ball from those set phases because we just felt that if we could get some good quality ball, we could put them under pressure like we had done in the first 15 or 20 minutes.”

He added: “I haven’t given the final a thought yet. I think it’s going to take us two or three days just to bounce back up from this as there are some pretty fatigued, bruised and beaten up lads.

“The final is three weeks away, we’ve got the Dragons in the league next week and we try and keep those two competitions separate.”

The semi-final clash had a typically ferocious start as these European powerhouses slugged it out, with the first attacking spark being provided by an Isaac Boss break.

After a crunching hit by Brian O’Driscoll on Clermont captain Aurelien Rougerie, Sexton showed good pace on a surging run from deep.

Leinster continued to gain ground with Isa Nacewa prominent, before Jamie Cudmore was ruled offside and Sexton smacked over an eighth minute opener.

James was off target with a monster drop goal attempt and some crisp passing released Nacewa again for a chip and chase, with Clermont conceding ground.

James did well to find touch on the left and then force a penalty at the breakdown, which he thumped over to level the game.

Sitiveni Sivivatu sliced up the right touchline from the restart to launch a dangerous counter as Clermont began to find their rhythm. A couple of crooked lineouts and a loose touchfinder from Sexton robbed Leinster of decent field position.

The 2010 French champions also wasted a good opportunity when going off their feet a ruck following a smart midfield break from James.

However, when Shane Jennings was turned over and Nacewa pinged for coming in at the side of a ruck, James sent the hosts ahead for the first time at 6-3.

Sexton replied with his second successful penalty, punishing Sivivatu for obstruction, yet Clermont were enjoying more territory now and James’ good form with the boot continued.

The Australian made it 9-6 after Healy was penalised at a ruck inside the ten-metre line, and a decision against the Leinster scrum led to them conceding three points on the cusp of half-time.

Six points down and away from home, Leinster needed a strong response on the resumption and they got just that – breaking through for the game’s only try after just 84 seconds.

Richardt Strauss’ inviting inside pass saw Kearney burst into space and he drew the final defender for Healy to touch down on the left. Sexton added the extras for a 13-12 scoreline.

Leinster got Kearney on the ball again soon after and his big left boot struck another considerable blow to Clermont’s title hopes. He launched over a towering drop goal to put four points between the sides.

Roared on by the vocal travelling support, Leinster were beginning to turn the screw and Clermont looked rattled. James miscued a penalty attempt from the left before steadying the ship with a three-pointer from in front of the posts.

Both coaches looked to their benches in a strength-sapping final 30 minutes, and players like Eoin Reddan, Heinke van der Merwe and Kevin McLaughlin stepped up to the mark for the men in blue.

The key partnerships of O’Driscoll and D’Arcy at centre and Leo Cullen and Brad Thorn in the second row remained in place, with the midfield duo’s tigerish tackling and work at the breakdown a constant feature for the holders.

The Leinster forwards solidified their set piece and Reddan’s snappy passing helped them maintain a high tempo against what looked a fading Clermont side.

Sexton rewarded the pack’s hard graft with another three points in the 63rd minute, and they might have made more of a barnstorming run from Sean O’Brien whose decision to kick rather than hold onto the ball will haunt him.

Clermont were pinned back in their own half for much of the remainder, forced to make tackles as Thorn, Jamie Heaslip and McLaughlin hit ruck after ruck.

As Leinster pressed for the clinching score, Reddan tried his luck with a drop goal effort which he screwed wide of the posts.

But the momentum swung back to Clermont in the closing stages as their big ball carriers began to punch some holes. Their forwards hammered away at Leinster’s defensive line, creating the one and only opportunity for the fast-breaking Fofana who fumbled at the vital moment under pressure from D’Arcy.

TMO Warren confirmed that it was not a try – much to the annoyance of the Clermont supporters – and Leinster, tested out in two further scrums, defiantly held on to put themselves just 80 minutes away from back-to-back Heineken Cup titles.