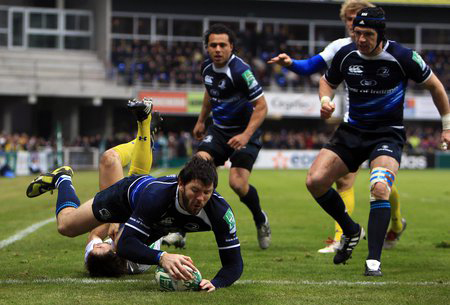 Speaking after the game, Leinster Coach Joe Schmidt said: “I thought we did enough to win, but the losing bonus point could be important at the end of the pool stages, so we’ll take it.

“At times we were close to their line but we let them off the hook and my disappointment is that we didn’t get the win. I know the values of Clermont and how committed they are at home, but we gave them a good fight both in our 22 and in their 22 as well.

“I’m proud of the way our guys played and the test next weekend will be exciting because both teams like to attack.

“We’ll get on with our recovery over the next two days and get ready for what will be the ‘fever’ next weekend.”

Shane Horgan got the visitors off to a blistering start when he displayed great strength and guile to power over after some excellent lead up work from Jonathan Sexton who took a wonderful Gordon D’Arcy pass to release Horgan in the corner.

The topsy-turvy nature of the game continued with Leinster enjoying more than their fair share of dominance and Eoin O’Malley, making his Heineken Cup debut, looked lively alongside the industrious D’Arcy.

Sexton and Parra exchanged penalties on 1 and 24 minutes respectively and the sides went in level 10-10 at the interval.

Clermont were fast out of the blocks and within two minutes of the second half pushed into the lead when Anthony Floch from close in. Parra’s second successful conversion made it 17-10 though Leinster again displayed resilience and Sexton’s 57th minute penalty reduced their lead to four points. Again Parra replied with a penalty virtually instantaneously.

Led by the superb Leo Cullen and the in-form Sean O’Brien Leinster looked dangerous and Shane Jennings was unfortunate not to be awarded a try in the 63rd minute after he was penalised for a double movement.

With the Irish province asking questions until the final whistle and defending with intent, Leinster could have gleaned
more from the fixture than the solitary point, but it was a small reward on a gripping night of European rugby.