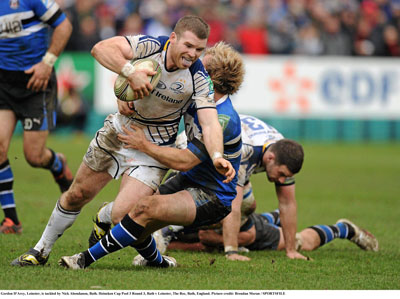 Leinster missed a number of try-scoring opportunities but a controlled second half display, which was topped off by Sexton’s kicks after 74 and 81 minutes, closed out the victory at the Rec.

Speaking afterwards, head coach Joe Schmidt said: “The frustration was that we couldn’t get the ball over their line. We appeared to have a couple of gilt-edged chances.

“We want to be a lot more accurate to make sure we finish opportunities that we create, but I am delighted with the result.

“Against a quality team it’s hard to create opportunities, and the last thing you want to do is butcher them like we did today. We almost suffocated ourselves at times.”

Solid defence early on staved off some Bath attacks sparked by Stephen Donald and Nick Abendanon before Leinster countered from deep through Luke Fitzgerald.

Sexton unleashed Fitzgerald on the left wing, Jamie Heaslip and Sexton provided the support but the latter’s looping pass back inside to Kevin McLaughlin was well covered by the hosts.

With the forecasted rain falling, Bath built up a head of steam and turned down a kick at the posts after a midfield surge from Matt Banahan.

But Leinster, meeting the English side for the fifth time in the tournament, scooped up a loose lineout and Sexton cleared the danger.

With possession won back, Rob Kearney fended off Dan Hipkiss and darted over halfway only to take the wrong option when passing to a tackled Sean O’Brien.

Bath took the lead after 16 minutes, Olly Barkley splitting the posts from a right-sided penalty.

Isa Nacewa’s thumping hit on Hipkiss summed up Leinster’s commitment, as did the series of tackles inside the 22 – led by the industrious McLaughlin – as Bath kept on the attack.

Heaslip quickly got over the ball to win a penalty which Sexton sent up towards halfway, Leinster grabbing a better share of territory as half-time approached.

Barkley doubled Bath’s lead with a 36th minute penalty and Sexton, following good continuity from Gordon D’Arcy and Nacewa, edged his first penalty attempt to the right and wide.

However, Leinster did get off the mark in first half injury-time, O’Brien providing the penetration as he charged forward and after Bath infringed Sexton converted from 32 metres out.

O’Brien powered past Donald as Leinster made a promising start to the second half, drawing a penalty as Dave Attwood infringed at a maul close to his try-line.

Sexton slotted the resulting penalty to draw Leinster level but another try-scoring chance went a-begging when O’Brien elected to hold onto the ball with three team-mates outside him.

Nacewa did brilliantly to reclaim his kick out of defence, Fergus McFadden kept the move going and just when O’Brien looked set to provide the scoring pass, Bath swallowed him up.

Leinster kept chipping away at the Bath defence, staying on the front foot and Sexton landed his third penalty to move the visitors ahead for the first time in the 55th minute.

A terrific break from Nacewa, set up by Sexton’s cross-field kick, then launched the province into attack mode again. It took desperate defence from Bath to keep Mike Ross out, with television match official Jean-Claude Levrier ruling that the prop had been held up.

A subsequent penalty from Sexton made it 12-6 to Leinster but Bath bounced back with a well-executed 66th-minute try from big winger Banahan.

They used turnover ball to put Jack Cuthbert into space on the right and he passed back inside for Banahan to score. Barkley added the conversion for a one-point advantage.

Leinster never wavered though, replacements Sean Cronin and Cian Healy carrying with great intent as Schmidt’s side beat a path towards the Bath line.

Bath captain Francois Louw lunged over the top of a ruck and conceded the penalty which Sexton fired over to move Leinster back in front, six mintues from time.

Louw was then ruled offside in the next phase, earning a yellow card from referee Jerome Garces.

The men in white dug deep in the closing minutes with replacement lock Devin Toner stealing a lineout before Sexton’s final kick completed a hard-fought success for the title holders.