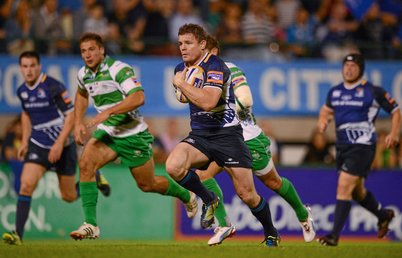 Sexton rescued a hard-fought win from the jaws of defeat as his 79th minute drop goal proved decisive at the Stadio di Monigo.

Making his seasonal debut, the Ireland out-half brilliantly held his nerve to kick Leinster to their second successive league victory after they had been stung by a late Fabio Semenzato try.

That try had been converted by Kris Burton, moving the Italians into an 18-16 lead, before Leinster reclaimed possession from the restart and set up Sexton for his match-winning heroics.

It was a topsy-turvy clash played in stiflingly warm temperatures, and Joe Schmidt’s men had to combat a fired-up Treviso pack as the hosts looked to bounce back from losing away to Munster last weekend.

The Italians had more of the ball in the early exchanges, Alberto Sgarbi putting in a good break and Alberto di Bernardo opening the scoring with a 12th minute penalty.

They continued to press from the restart, their beefy pack making good yardage under the direction of scrum half Tobie Botes.

Kevin McLaughlin was picked out for a deliberate offside as Treviso got within striking distance, with the yellow card for the flanker leaving Leinster shorthanded.

The subsequent penalty was missed by di Bernardo, but Treviso maintained their presence in the Leinster half and from a quick tap and go Robert Barbieri snuck in for a try which needed confirmation from television match official Stefano Marrama.

The conversion was missed and Leinster hit back following McLaughlin’s return to the pitch. Simone Favaro infringed at a ruck just outside the Treviso 10-metre line and Sexton fired the penalty through the posts for 8-3.

That is how it remained for half-time as Leinster clawed back some territory after defending a close-in lineout, set up by a clever Botes kick.

A double tackle by McLaughlin and Sexton forced Ludovico Nitoglia to cough up possession as he attacked near the Leinster posts, and Andrew Conway’s kick found touch.

A Sexton penalty set up a decent chance to attack, in the dying seconds, but despite a well-orchestrated lineout maul – with Shane Jennings in possession – Leinster were unable to conjure up a late try.

The Heineken Cup champions made a superb start to the second half though, a flash of brilliance from Brian O’Driscoll seeing him split the Treviso midfield and go over unopposed. Sexton converted from in front of the posts for a 10-8 turnaround.

Sexton was off target with a long range penalty attempt approaching the hour mark, but the Leinster forwards were beginning to make their mark – led by stand-in captain Jamie Heaslip.

A lineout steal in the hosts’ 22 by Devin Toner, making his 100th appearance for the province, led to a sustained period of pressure from Schmidt’s charges.

McLaughlin barged his way up on a muscular run and a simple penalty saw Sexton extend the lead to five points, with Treviso struggling to keep their discipline at times.

The stretcher was required for Richardt Strauss who took a heavy knock and the Leinster medics were quickly on the scene. Sean Cronin replaced him – the South African was thankfully sitting up on the bench soon after – and Toner also made way for Leo Cullen.

Treviso knuckled down and earned a penalty which replacement Burton stuck over to make it a two-point game with 15 minutes remaining.

Leinster renewed their efforts as they went in search of a match-winning score, yet handling errors undid some nice approach work by the likes of Fergus McFadden and replacement Isa Nacewa.

Schmidt’s side were suddenly on the brink of defeat when Treviso replacement Fabio Semenzato got free from close range to wrestle his way over for a 77th minute try. The TMO confirmed the grounding and Burton’s conversion saw the hosts retake the lead.

They looked set for victory, only for Leinster to have the final say in the form of Sexton’s terrific drop goal from John Cooney’s pinpoint pass. The win has moved Leinster up to sixth in the table, ahead of Edinburgh’s visit to the RDS next Saturday.