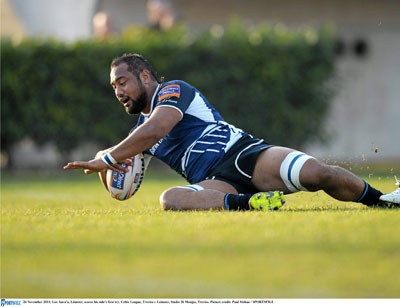 This corresponding fixture at the Stadio di Monigo last season saw the province fall to a disappointing defeat, but they put in a much-improved collective effort this time around.

The visitors got off to a storming start, their powerful number 8 Leo Auva’a breaking through a couple of tackles in midfield to touch down after just 28 seconds.

Benetton Treviso had fumbled Ian Madigan’s kick-off and Joe Schmidt’s side needed no second invitation with Damian Browne and Cian Healy taking the ball into contact.

McFadden converted Auva’a’s fastest try of the league season and the Italians, who started with 13 internationals, answered back with a fourth minute penalty from Tobie Botes.

But Leinster exposed some poor home defending again four minutes later. Neat passing from Eoin O’Malley and Luke Fitzgerald invited the supporting Fionn Carr through a gap and he coasted over to the right of the posts.

McFadden’s successful conversion made it 14-3 and in an energetic and expansive first quarter, Botes soon rifled over his second penalty.

The Treviso scrum half launched a series of attacks out wide, maintaining a high tempo and after Leinster infringed at a close range ruck, another three points was added.

McFadden squeezed a 24th minute penalty over from the left, rewarding his forwards for some good work at close quarters.

With the lion’s share of possession, Treviso clawed the deficit back to 17-12 courtesy of a fourth accurate kick from Botes, who punished Leinster captain Shane Jennings for a high tackle.

The battle between the place-kickers continued into the second half, Botes and McFadden swapping early penalties as the game cantered along at a high pace.

The influential Brendan Williams and Botes then sparked a kick chase on the right which led to a five-metre scrum for the Italian outfit. Their replacement number 8 Manoa Vosawai surged off the base and managed to ground the ball successfully.

But Botes missed the chance to kick Treviso in front. Moments later, a clever angled run from Fitzgerald helped set up a long range penalty for McFadden whose well-judged strike edged Leinster ahead again at 23-20.

Botes miscued a kickable penalty as Treviso looked to hit back quickly, with a strong hit from the Leinster front row forcing a scrum penalty. Madigan lined up the kick from inside his own half and his attempt only just fell short of the target.

Leinster showed better control on the restart, Carr hitting the line at pace and Healy and Sean Cronin running hard at the Treviso defence.

With 63 minutes on the clock, O’Malley surged inside Alberto Sgarbi and accelerated away from the covering Williams for a terrific individual try – his third in two games.

McFadden added the extras for a 30-20 scoreline and some breathing space for Schmidt’s men, who gained a relieving penalty thanks to a strong scrum near their line.

Schmidt brought on a number of replacements for the closing stages, with the likes of Jack McGrath and Brendan Macken gaining some valuable experience.

Leinster’s tigerish defence was tested out right to the final whistle, and they denied the Italians a losing bonus point despite losing Jennings to a yellow card for a deliberate knock on.

Botes drew the resulting penalty kick wide of the posts and Carr was rock solid as Paul Derbyshire tried to work the scrum half in for a last-gasp try.