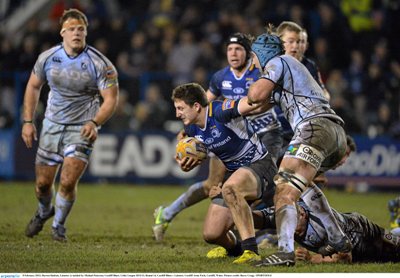 Leinster took the lead after four minutes through an Ian Madigan penalty. Blues flanker Michael Paterson was penalised for not rolling away and Madigan made no mistake, confidently converting from 30 metres.

Cardiff Blues responded positively with a flowing backs move involving Rhys Patchell who passed to winger Owen Williams, who chipped over the head of Darren Hudson but the excellent Dave Kearney put him under enough pressure and forced the five metre scrum which leinster managed to clear.

After 14 minutes, Rhys Patchell brought the Blues level with a 40m penalty after Leinster were penalised in their own line out. Four minutes later, Andrew Goodman made good inroads for Leinster but when brought down, he was penalised for holding on. Patchell missed the resulting penalty.

Leinster Second row Tom Denton was sent into the sin bin in the 21st minute. An off the ball tackle on his opposite number James Down was seen by referee Peter Fitzgibbon who brandished the yellow card. It was 14-man Leinster who threatened the scored board and Ian Madigan restored the lead with a long distance penalty of his own which went over off the upright.

Following good pressure from Leinster’s Brendan Macken and Shane Jennings, Blues full back Jason Tovey knocked on just five metres from his own line which resulted in a Leinster scrum. The ball squirmed out and Jordi Murphy tackled Harry Robinson into touch. Michael Paterson refused to leave the ball go and referee Fitzgibbon awarded Leinster a penalty which Madigan duly converted to put Leinster 9-3 up.

Denton returned from the sin bin and during his cooling off period, Leinster didn’t concede a point whilst playing with 14 men.

Five minutes before half time, Ireland international Isaac Boss scored Leinster’s opening try of the night. Great work by Dave Kearney resulted in decent field position deep in the Blues 22. Three more phases elapsed and scrum half Boss weaved his way through the Blues defence from close range. Madigan made no mistake with the conversion to put Leinster 16-3 in front.

A commanding first half performance from Jordi Murphy was rewarded as he scored Leinster’s second try on the stroke of half time. A solid Leinster scrum left Murphy with the perfect platform to pick up and barge his way over the try line. Madigan added the extras to give Leinster a 23-3 half time advantage.

Ten minutes into the second half, the Blues did pull a try back through Jason Tovey. Robin Copeland who was a constant threat throughout, offloaded to the full back who touched down in the corner. Patchell missed the conversion and the score was 23-8 to Leinster.

Patchell reduced the gap with another three points after 59 minutes.  The same player thought he had scored but referee Fitzgibbon had already given a knock on against the Blues. Leinster cleared the danger from the resulting scrum.

The Leinster scrum was solid throught and another powerful scrum from Leinster resulted in a penalty being awarded by referee Fitzgibbon. Madigan kept up his 100% record with another penalty to make it 26-11 with ten minutes to go.

Madigan tried to take his personal tally to 19 but missed with a late drop goal attempt. The influential Madigan’s cross field kick almost found Eoin O’Malley who couldn’t gather the ball with the try line begging, after an awkward bounce was against him.

With the last play of the game, the Blues almost narrowed the margin of victory but they couldn’t utilise an overlap and Noel Reid got hold of the ball. Reid got forced into touch and referee Fitzgibbon blew for full time as Leinster secured a well earned victory at the Arms Park.

Leinster coach Joe Schmidt was understandably delighted with the victory.

“I am delighted with the win, we had 15 guys in camp with ireland. We had to draw on some of the young guys in some sticky conditions under foot.”

“Jack McGrath did well and so did Jack O Connell when he came on. Michael Bent was very strong in scrum. Dominic Ryan hasn’t had a massive amount of rugby but played very well.”

Speaking about Ian Madigan’s 100% record with the boot, Schmidt added, “Madigan kicked very well, Ian was 100% which allows you to build score board pressure. It was good game management from Ian tonight.”

“There is certainly a bit of life left in the old dog Leo Cullen. He is a workhorse. He got through work that people didn’t see. He is a great guy to have for this part of the season.” 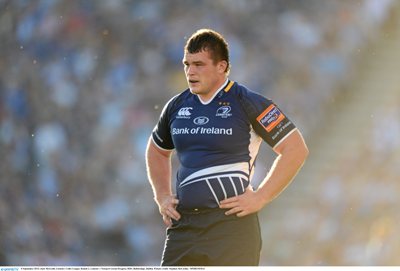