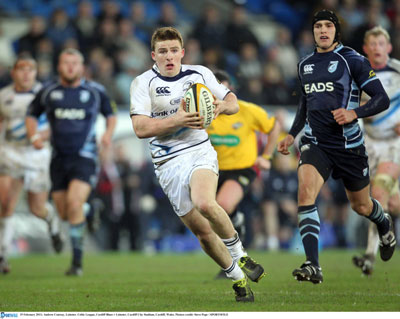 Speaking after the game, Leinster Coach Joe Schmidt said: "The positives were that there were a few guys making their first starts of the season. Also we kept trying right to the very end, but we've got to maintain our standards and credit to Cardiff because they held on to the ball for long periods. A few more of the (younger) guys also picked up a bit more experience, which will stand to them.

"The fact that we are down 15 players would indicate that this is a difficult time of the year, but it's like that for a number of teams in the league and I know that Cardiff were without a few guys too. It was particularly disappointing to lose out on the bonus point at the end. We have to pick ourselves up and resume the scramble for points next weekend."

Leinster weathered an early spell of pressure and an Isa Nacewa penalty in the third minute narrowly fell wide of the posts. The game ebbed and flowed and a Richardt Strauss burst was halted moments later.

Cardiff almost pushed into the lead after 11 minutes but winger Richard Mustoe’s break up the wing was halted by an excellent covering tackle from Leinster out-half Ian McKinley.

The hosts kicked the first points of the evening seven minutes later through out-half Ceri Sweeney who slotted home a straightforward penalty to make it 3-0. On 28 minutes Xavier Rush was denied from McKinley metres from the try-line after Cardiff enjoyed a spell of territorial pressure.

Eventually Cardiff’s pressure told and full-back Dan Fish gathered a Martyn Williams pass to touch down in the corner. Sweeney’s conversion attempt struck the upright, but the hosts pushed into an 8-0 lead.

Still Leinster probed but a Nacewa penalty eight metres inside the Welsh side’s half fell short of the posts, but on the stroke of half-time Nacewa made amends with a penalty to give the hosts a slender 8-3 half time lead.

Leo Cullen, making his 150th appearance for the province, led the early charge in the second half as Leinster upped the ante, with Eoin O'Malley also coming close to touching down before being denied by the Cardiff rearguard.

The see-saw nature of the game continued though with a forward pass denying Welsh international wing forward Martyn Williams from scoring his side's second try of the evening. A trio of Leinster replacements on the hour mark included Stan Wright, making his first appearance of the season, as Leinster rallied.

An Andrew Conway break sliced through the Cardiff defence but the pass to the supporting Dominic Ryan fell inches short as Leinster attacked. Cardiff regrouped but a 74th minute Sweeney penalty fell short of the mark, but he made amends minutes later to extend Cardiff's advantage to eight points.