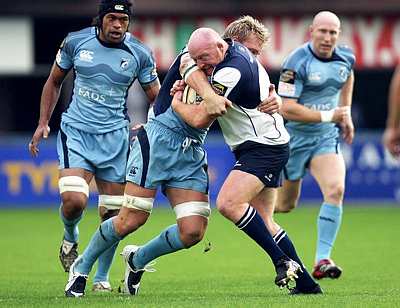 Leinster earned a hard-fought 16-16 draw in the Arms Park to kick-start their Magners League campaign against the Cardiff Blues.

Leinster fought back from a 10-3 half-time deficit, but were denied victory by a late Ben Blair penalty. Felipe Contepomi kicked three penalties and a conversion to Leinster debutant Isa Nacewa’s 68th minute try after excellent work by the impressive Malcolm O’Kelly.

Rival full-backs Ben Blair and Nacewa scored a try apiece. Blair’s came in the first-half after a spell of good pressure from the hosts. The defences were otherwise safe as the two full-strength sides cancelled each other out.

Speaking after Saturday evening’s draw, Leinster captain Chris Whitaker said: “A lot of teams will find it tough to come here and get a result. We would rather a win for sure, but I think that we’re learning the importance of taking points from every game. In that respect we did well to come away with two (points).

“It was a tough game. They have a big pack so the breakdown was quite physical, but I thought we did quite well there. We knew that there was still 20 minutes left when Isa (Nacewa) went over and that they had a big wind behind them, so there was no sense that the game was won at that stage.

“Every game here is tough and tight. I hope that we’ll be in contention as the season continues. We’re not involved to come second. We will continue to do our very best to win each week and see how things go from there.

“The Edinburgh game should be quite good. All the guys love playing at home and we know that we’ll have a big support back in the RDS to really get behind us.”