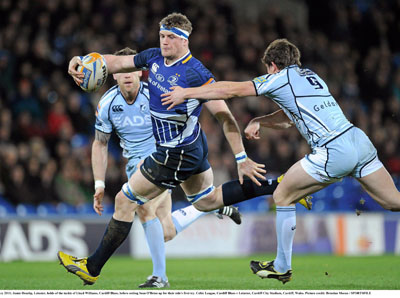 Speaking after the game, number 8 and stand-in captain Jamie Heaslip said: “We don’t care where we go or where we play. If we bring our own intensity and just worry about the job we have to do rather than the team that we’re playing, I don’t think it really matters where we go to or what the circumstances.

“A lot of lads put their hands up tonight and I thought Mark (Flanagan) in particular had an awesome game.

“I’m happy with the way the match went for myself and as a squad we’re all going well. I think we can be a lot more clinical though. We turned over the ball too easily at times and threw one or two passes we shouldn’t have.”

Leinster were too sharp for a flatfooted Cardiff defence in the opening quarter, with Sean O’Brien and Rob Kearney breaking through for early converted tries.

Eoin Reddan took a quick tap penalty and O’Brien linked with number 8 Heaslip before his well-timed pass sent the flanker barging over past Leigh Halfpenny near the posts.

Jonathan Sexton converted and the fluid movement of the province’s attacks outwitted the Blues again, Kearney hitting the line at pace to take Sean Cronin’s flat pass and swerve away from Halfpenny, the final defender.

Sexton’s conversion was cancelled out by a long range penalty from Halfpenny as the Blues show signs of a recovery, with the midpoint of the half approaching.

The full-back landed a second penalty soon after, punishing Cian Healy for an infringement, but Leinster were quickly back on the attack with Kevin McLaughlin, Healy and Devin Toner hitting rucks hard.

Toner’s second row partner Mark Flanagan, making his first start at this level, showed a good turn of pace as he led a counter attack from inside the visitors’ half.

The gap was closed to 14-9 when Dan Parks landed a smartly-taken drop goal, following up on a good break out wide from Lloyd Williams.

The game opened up as half-time approached and Halfpenny was just short with a monster 57-metre penalty attempt from the right.

Sexton replied with a measured penalty from 37 metres with Isa Nacewa introduced for an injured Gordon D’Arcy just before the break.

17-9 to the good, Leinster made a strong start to the second half – Heaslip was held up close to the posts before Sexton fired over his second penalty goal.

Halfpenny offered a familiar response for the Blues, keeping them in touch as Leinster were pinged for a scrum offence. A thrusting run from Heaslip gave the province momentum again, but the try-scoring opportunity was missed.

David Kearney had to be on his toes to touch down a Casey Laulala kick as Cardiff threatened the Leinster try-line for the first time.

The extras were added by Halfpenny, making it a one-point game at 20-19 and giving Leinster plenty to do in the final quarter.

Halfpenny missed two penalty attempts as Cardiff enjoyed a period of dominance, yet Leinster hit back with a surefooted strike from Fergus McFadden.

The penalty was awarded after Andrew Conway had been tugged back by Macauley Cook as he tried to chase his own kick from inside the Leinster half.

The excellent McFadden, who got through an amount of work, put in an important tackle on Laulala which secured turnover ball and Rob Kearney cleared to halfway.

Cardiff enjoyed the lion’s share of possession and territory in an exciting finish, but two relieving penalties helped Leinster see out a hard-fought victory with Heaslip and replacement Jordi Murphy putting pressure on the hosts at the breakdown.