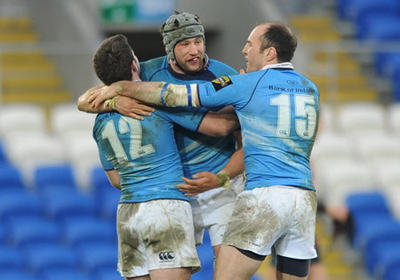 The visitors had centre Fergus McFadden to thank for their 16-12 half-time lead boosted by a well-executed 8th minute try – where he took a deft inside pass from Shaun Berne after a spell of forward pressure – and 11 points from his boot.

Gary Powell, Sam Warburton and Chris Czekaj scored Blues tries and Ben Blair and Ceri Sweeney kicked penalties as the home side rallied in spurts, but a 50th minute Bernard Jackman try – after some excellent play by the impressive Eoin O’Malley – a second McFadden conversion, Shaun Berne drop-goal and a fourth McFadden penalty sealed the win.

Speaking after the game Leinster Coach Michael Cheika said: “I was pleased that the younger guys who had an opportunity to play stood up quite well and even though there’s so much to play for still, we’re focused on the performance and we’re pleased with how we went.

“We knew that we’d have to defend for long periods and then take our opportunities when they came and it was important for us to capitalise on the opportunities that came our way. Today we made a decision to play some of the younger players and the likes of Andrew Conway and Eoin O’Malley – who hasn’t played a lot in the Magners League – did well.

“We haven’t had a lot of continuity in the Magners League so far this year so we haven’t been as fluent in our play, but we showed real character which is pleasing.

“It’s a happy dressing-room in there, as it should be.”