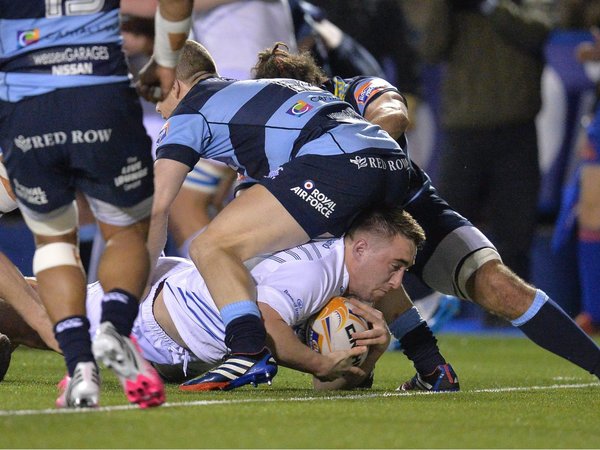 Matt O'Connor's side moved to the top of the table ahead of the weekend's action, as Jack Conan, Richardt Strauss, Michael Bent and Eoin Reddan all crossed for tries at the Arms Park.

Number 8 Conan's pace off the mark helped him score a fourth minute try from a scrum, with Jimmy Gopperth converting and also adding the extras to Strauss' 18th-minute try.

But Leinster were made to pay for a sloppy second quarter defensively, as Cardiff's tricky runners began to influence proceedings.

Their number 10 Gareth Davies nipped over for a converted try midway through and although Gopperth replied with a penalty, the Blues finished the first half with hooker Kristian Dacey's fifth try of the league campaign.

Dacey's maul effort closed the gap to 17-12 and came after Leinster's Tom Denton was yellow carded in the 35th minute.

Davies and Gopperth swapped penalties on the resumption as the Welsh region continued to threaten before the visitors hit them with two converted tries in four minutes.

Prop Bent touched down for the first time in his Leinster career and influential scrum half Reddan soon darted in behind the posts for the bonus point score.

Blues full-back Dan Fish earned a deserved try in response, but Leinster were able to hold Phil Davies' men at arm's length for the remainder of the game.

There was barely a minute on the clock when Gareth Davies' attempted clearance was charged down by Quinn Roux and the lock was just unable to gather the loose ball.

Leinster turned down a kickable penalty and although the ball squirted out from the subsequent five-metre scrum, Conan gobbled it up to stretch over and score despite the best efforts of Robin Copeland and Gavin Evans.

Gopperth converted for a 7-0 lead and the visitors pressed for a swift second score, Noel Reid and the returning Strauss bringing them back into the 22 before the latter fumbled out on the left wing.

Cardiff showed a willingness to run from deep but despite Isaia Tuifua and Josh Navidi making decent yardage, the tactic played into Leinster's hands at times.

Strong runs from Luke Fitzgerald and Reddan got the province into try-scoring range in the 18th minute, and they created numbers on the left for Fitzgerald to send Strauss over in the corner.

A peach of a conversion followed from Gopperth, however the Blues answered back within four minutes as out-half Davies took advantage of a slip by Kevin McLaughlin to jink his way in under the posts for a seven-pointer.

Cardiff continued to improve with Tuifua driving forward in midfield, however Filo Paulo's maul infringement allowed Gopperth to make it 17-7 on the half hour mark.

Ireland Wolfhounds cap Copeland blew a two-man overlap as the Welsh side looked certain to score a second try, and it almost came after some fluid running from Fish.

Hands in the ruck from Denton near the Leinster line saw him sin-binned, and Cardiff took full advantage as Dacey crashed over in the right corner from a lineout maul.

Davies' conversion attempt went narrowly to the right and wide, leaving a five-point margin between the sides at half-time.

Rhys Ruddock was introduced on the restart, replacing McLaughlin (broken nose) and also taking on the captaincy role. The Ireland flanker was a key figure throughout the second period.

Denton was just back on the pitch when Davies knocked over a penalty for the hosts, which was cancelled out by Gopperth whose 41-metre kick bounced over off the crossbar.

Cardiff kept hold of the momentum but Leinster suddenly used turnover ball to conjure up their third try of the night after 52 minutes.

Bent, who had a stint at tighthead, broke through off the back of a close-in ruck after Ruddock had been tackled short.

Gopperth converted and then topped off Reddan's effort to leave the Blues 34-15 adrift. Leinster used their scrum and a muscular maul to bludgeon through and the scrum half dummied a pass to snipe over from close range.

To their credit, Cardiff hung in there as key men Davies and Fish combined in attack, the latter breaking a tackle from his opposite number Zane Kirchner to run in a 61st converted try.

Both sides were still full of running, with Kirchner and replacements Mike McCarthy and Ian Madigan all prominent in the final quarter.

Young prop Tadhg Furlong, who scrummaged well throughout, got on the ball twice as Leinster set up a late penalty but Gopperth failed to deliver the three points.

It was not needed in the end as the province completed a season's double over Cardiff, with a similar scoreline to their bonus point home victory (34-20) over the Blues back in September. 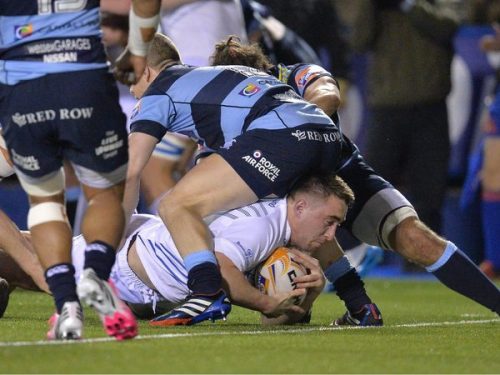