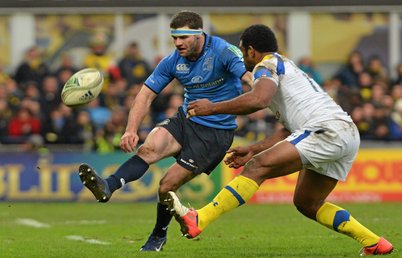 Despite a first defeat in this season’s Heineken Cup, the defending champions emerged with a clutch of positives ahead of next Saturday’s return date in Dublin.

Sean O’Brien had an impressive return to European action in a barnstorming back row unit, while Fergus McFadden and tournament debutant Andrew Goodman were the pick of the visitors' backs.

After watching his side fall to a narrow defeat, Leinster head coach Joe Schmidt admitted: "It is incredibly disappointing. The fact that we’ve got to try to get ourselves up and forge ahead for next week is going to be tough as well. We’ve got a fair few bruised bodies in there."

He added: "I just think you come to the (Stade) Marcel Michelin and I think you’ve got to get over the line. You can’t just go between the posts and hope to get something here.

“I thought there were a couple of calls that maybe could have gone our way and we could have got something else between the posts.

“But the area that Johnny actually kicked out of when he cross-kicked was very, very heavy and muddy. It’s not a guaranteed three. We did miss one and they didn’t miss any. So that’s how close these games are and it is really unfortunate.”

There was a raucous, red-hot atmosphere in Clermont’s home fortress where the French club boast an unbeaten run that recently passed 50 games.

Clermont drew first blood, Parra popping over a penalty from in front of the posts, but Leinster carried more of an early threat with ball in hand.

Jamie Heaslip’s inside pass put Ian Madigan through a midfield hole, and Sexton stepped up to convert the subsequent penalty.

An obstruction from a lineout went unpunished as Sexton squeezed a tricky penalty to the left and wide, with play swinging back and forth at a hectic pace.

A strong burst from Napolioni Nalaga led to Parra kicking power-packed Clermont back in front by the end of a defence-dominated first quarter.

The home side cranked it up as Sitiveni Sivivatu drew in two defenders, releasing Aurélien Rougerie and Lee Byrne for a right wing surge that almost led to a try.

A third successful penalty from Parra stretched the margin to 9-3, but Leinster were quick to respond through a bout of sturdy carries from McFadden, Cian Healy and Kevin McLaughlin.

Sexton was back on target with a penalty from the 22 and as the Leinster pack exerted more control amid a hectically high work-rate, they continued to make good ground.

Madigan burst into the 22 with the province keeping a stranglehold of possession. Clermont were then pinged for not rolling away and Sexton brought the title holders level.

Supremely-committed winger McFadden was one of the players to stand out in the opening 40 minutes, using his pace to chase down kicks and defending smartly out wide.

However, Clermont hit back through a right-sided penalty from Parra and James’ late drop goal put six points between the sides at the break – 15-9.

Sexton and Madigan probed with clever kicks on the resumption, and Isa Nacewa and McFadden both went close to collecting cross-field bombs from the Leinster number 10. Wales and Lions full-back Byrne did brilliantly to deny Nacewa near the try-line.

Clermont looked to be tiring but Byrne did well again to sweep the ball into touch with Nacewa bearing down on him as he chased Gordon D’Arcy’s dangling kick.

Although the French outfit responded with two sidestepping runs from the dangerous Wesley Fofana, Leinster defended stoutly and continued to chip away at Vern Cotter’s men.

However, a couple of loose lineouts – with replacement hooker Richardt Strauss on the pitch – robbed the province of promising positions as they failed to get the scores to match their territorial dominance.

Break-outs from Nalaga and Rougerie saw Clermont threaten in the dying minutes, and Leinster, with Shane Jennings making a key impact off the bench, had to put their bodies on the line in a bruising breakdown battle.

The result – Clermont Auvergne's third win of the campaign – leaves them with a five-point buffer at the top of the table. The sides will regroup for a vital second meeting at the Aviva Stadium next Saturday afternoon.