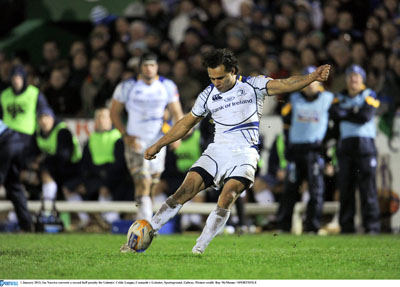 Isa Nacewa’s 100% place-kicking return was the difference between the sides as Leinster squeezed past their provincial rivals Connacht.

Although Connacht had the better of a slow burning first half, three penalties from man-of-the-match Nacewa nudged Leinster into a 9-3 lead at the break.

Connacht took advantage of second half sin-binnings for Isaac Boss (55 minutes) and Leo Cullen (71) as they created tries for Tiernan O’Halloran and South African Ethienne Reynecke.

But Matthew Jarvis and replacement Miah Nikora missed both conversions, with the latter also watching his last-gasp drop goal attempt fall under the crossbar in a dramatic finish.

Speaking afterwards, Leinster head coach Joe Schmidt said: “The gust of wind that maybe pushed it (Nikora’s kick) back a bit was unlucky for them and I think that would sum up their night when you add that to Harlequins away when they scored two tries to one. They just can’t buy a trick at the moment and I’d sympathise with Eric (Elwood).

“I don’t think we controlled the game well after that (the first sin-binning) and that’s our responsibility. We’ve got to be able to cope in that situation and once that happened and we started to get rattled that affected anything we tried to construct.

“This is a really tough place to come at this time of the year because they are least affected by international camps and the international players getting time off.

“We always knew this was going to be a bit of a scramble and to scramble out of here with four points, as I say I’m delighted but the way we did it, we’re disappointed with that last 30 minutes.”

Gunning for their first win in 12 outings, Connacht showed early signs of intent in front of a RaboDirect PRO12 record crowd of 6,582 at the Sportsground.

The best move came when an in-form O’Halloran tested out the Leinster defence on an eye-catching counter attack from inside his half.

Jarvis, a late inclusion in the starting line-up, missed his first shot at the posts in the sixth minute and was wayward from further out five minutes later.

But the young out-half was successful with a 35-metre effort shortly afterwards, punishing Leinster for bringing down a maul illegally.

Leinster were quick to respond, drawing a ruck infringement from John Muldoon which resulted in Nacewa slotting over his first penalty.

Another sweetly-struck kick into the wind from Nacewa, this time from 38 metres out, moved Joe Schmidt’s men in front despite Connacht controlling much of the play.

Defences were on top in the period leading up to half-time and it took a powerful drive from the lively Rhys Ruddock to tee up Nacewa’s third penalty.

Backchat led to referee John Lacey moving the penalty into kickable range and the full-back managed to squeeze his attempt inside the left hand post.

The Leinster pack built some momentum before the break, however an important steal by Ronan Loughney helped the home side clear the danger.

Connacht were back on the defensive during the early part of the second half, Nacewa maintaining his impressive form with a precise 49th minute kick.

The arm wrestle up front continued, with a number of promising phases strangled into submission by the sheer force of the tackling.

The sin-binning of Boss for interfering with Frank Murphy’s pass from a midfield ruck gave Connacht a chance to hit back – and they duly did with O’Halloran touching down.

A string of quick passes created the space on the right with Jarvis putting O’Halloran over just moments after fellow winger Brian Tuohy was stretchered off.

The try was unconverted though, and Nacewa soon struck his fifth penalty goal of the night to move the league leaders 15-8 clear.

But Connacht stuck doggedly to their task and with Cullen carded for taking out a lifter at a five-metre lineout, Reynecke charged over off a subsequent maul.

Nikora slipped as he tried to convert from a right-sided position and agonisingly for the home crowd, the New Zealander had the accuracy but not the distance when attempting that drop goal at the death.

Leinster, who almost scored a late try through Sean Cronin, hung on to claim a valuable four points. The result keeps them in a comfortable position at the top of the table, ahead of next weekend’s trip to Cardiff.