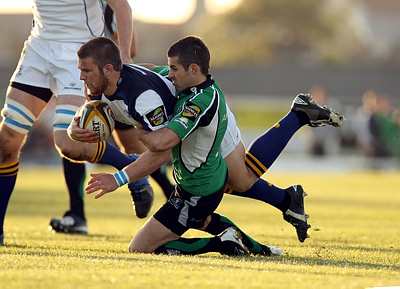 Though the reigning Magners League champions gained a losing bonus point, there was disappointment all round as six Felipe Contepomi penalties weren’t enough in a sun-kissed Galway.

With Devin Toner and Sean O’Brien making good inroads early on, Leinster looked the dominant side and Contepomi kicked his first effort on 14 minutes before one-time Leinster out-half Ian Keatley replied for the hosts nine minutews later.
Contepomi and Keatley then traded a brace more each to level the scores 9-9 at the interval.

Second row Michael McCarthy then weaved in to score on 48 minutes but was red carded for a second bookable offence in an altercation. Keatley added the points to give the hosts a 16-9 lead.

Contepomi, earning his 100th Leinster cap, added two more penalties either side of a 53rd minute effort from Keatley. Contepomi added a final penalty with five minutes remaining but Connacht held on to seal the win.