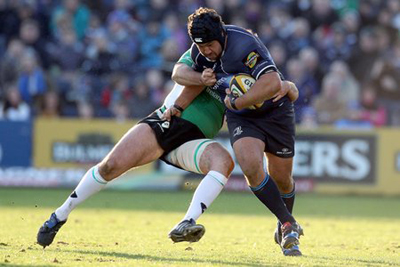 Leinster fell to a disappointing 27-13 defeat away to Connacht in the Sportsground, Galway in Wednesday night’s Magners League clash…Michael Cheika Post Match Reaction…

Speaking after the game Leinster Coach Michael Cheika said: "They (Connacht) have shown pretty convincingly all season that they are a good side, even in the game up in Dublin when we were lucky to win.

"I don’t think that they’re a bottom of the league team and we know that they have a lot of quality because we have coached a few of them ourselves. We lacked an edge in defence. We had a lot of possession but we didn’t use it properly, but in the second half we attacked the line better.

"We worked hard, but it’s another game that we have lost here because we lacked the correct attitude. Brian (O’Driscoll) finished the game and he’s fine, but Girvan (Dempsey) suffered a neck injury and we just have to manage our resources now with a game coming up against Glasgow on Friday."

Leinster dominated large periods of the first half and a succession of scrums on the westerners’ line couldn’t breach the excellent Connacht rearguard.  Stan Wright came close with successive bursts, while Eoin Reddan sniped intelligently, but a 35th minute try from Brian Tuohy gave them a 7-0 lead at the break after Miah Nikora slotted home the conversion.

The hosts surged clear after tries from Michael Swift (48) and Troy Nathan (64), but Leinster dug deep and a 69th minute penalty try gave the visitors hope, with Shaun Berne adding the points thanks to a drop kick to speed up play as Leinster pressed.

But Connacht eased to victory and moved off bottom spot as replacement Ian Keatley’s 72nd minute penalty extended the lead to an ultimately unassailable 14 points.