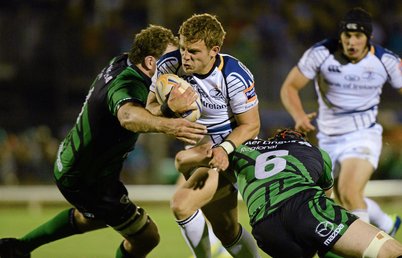 Connacht were much the better side on a night when precious little went right for Leinster, who had to adjust owing to first half injuries to Gordon D’Arcy (ribs), the returning Rob Kearney (back) and Quinn Roux (shoulder).

Isa Nacewa, who had been a late withdrawal from the starting line-up due to illness, was pressed into action as Kearney’s replacement on the half hour mark but by that stage Connacht were already 14-6 in front.

Leinster were hurt by yellow cards in each half. When Brendan Macken was off they conceded eight points, and Leo Auva’a’s sin-binning led to two final tries for the fired-up westerners.

“It’s a super night for Connacht and just reward for Eric Elwood and his crew. They’ve worked hard and (our former prop) Nathan White will have enjoyed that tonight, captaining Connacht to victory.

“We were not as accurate as we needed to be. Our lack of fluidity is evident in our performances so far. The rebuilding starts on Monday and we have a full week to work into the Munster game.”

Making his long-awaited debut for Connacht, Dan Parks was a steadying presence at out-half as the hosts faced into a buffeting wind early on.

Ian Madigan opened the scoring for Leinster five minutes in, drilling a penalty over to punish Johnny O’Connor for sloppy ruck play.

Michael Swift was inches away from marking his record 150th league appearance with a try, Tom Sexton doing well to deny the Connacht veteran as he crashed over the try-line.

From the resulting scrum, centre David McSharry cut clean through the Leinster defence – fed by Parks – to score a fine try to the left of the posts. The former Scotland international added the extras.

Madigan replied for the visitors courtesy of a meaty penalty kick from the left, however that run of injuries left Leinster needing to regroup.

Connacht took full advantage, relishing the ferocity of the forward exchanges and using the ball intelligently to put their backs into the space afforded to them by a sluggish Leinster defence.

On one such occasion McSharry injected pace into a move and the supporting Robbie Henshaw sent Fetu’u Vainikolo breaking away on the left, with the Tongan winger stepping inside John Cooney‘s final challenge to score.

Parks clipped over the conversion from the left and as Leinster had to scramble to save another try, as a break from Tiernan O’Halloran almost led to Kieran Marmion getting in under the posts.

Connacht kept the pressure on and when Macken interfered with Marmion at the base of a ruck, the Leinster centre was shown a yellow card.

The remaining 10 minutes of the first half saw Leinster forced to defend in their half. Fionn Carr could not keep O’Halloran who crashed over on the right from an Eoin Griffin pass, and with time up Parks landed a long range penalty.

Madigan missed a penalty opportunity and despite those better results up front, Leinster were unable to hit back on the scoreboard.

Number 8 Auva’a fumbled a long, inviting pass from Madigan as one of their most promising attacks ended in a knock on.

Connacht were forced on the defensive, particularly after O’Halloran was sin-binned for not releasing a tackled player, but Leinster lacked their usual cutting edge as chances went a-begging.

After Henshaw went close with a drop goal effort, Leinster lost Auva’a to the sin-bin and Connacht seized their opportunity again – a lineout maul provided the platform for number 8 Naoupu to plunge over.

That unconverted fourth try was followed by a final seven-pointer, replacement prop Loughney showing his alertness at a late lineout to touch down and replacement Miah Nikora converted to put 28 points between the sides.

Leinster even missed out on a consolation try in injury-time as Healy had a score in the left corner ruled out for a foot in touch.