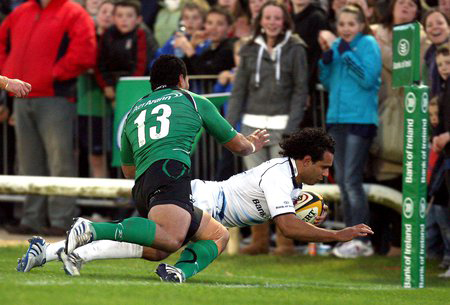 Speaking after the game Magners Man of the Match Richardt Strauss said: "We have found it hard coming here over the last few years and we made some mistakes this evening, but we're pleased to get the win and our fist victory on the road.

"Connacht are a really good side and they put a lot of pressure on us. I don't think our last try was a fair reflection on them, but it was important that we kept up our recent good form. We have struggled a bit on the road this year, so it was an important win for us."

It was a balanced opening by both sides played in front of a vocal full house in Galway, and Leinster's territorial dominance was eventually rewarded in the 17th minute when a wonderful incisive Isaac Boss break found Isa Nacewa out wide on the wing who crashed over in the corner.

Jonathan Sexton's conversion attempt fell wide of the upright, but the St. Mary's out-half turned provider 14 minutes later when his vision found Jamie Heaslip but the Leinster skipper was denied a try. In the 33rd minute Ian Keatley reduced Leinster's lead with a penalty and Leinster went into the interval with a narrow 5-3 lead.

With Leo Cullen and Devin Toner causing problems for the Connacht pack and hooker Richardt Strauss keeping up his excellent recent run of form Leinster threatened. Eventually the visitors' pressure told through the boot of Sexton who slotted home a touchline penalty effort in the 48th minute.

Keatley kicked his second penalty five minutes later before Sexton's 62nd minute strike helped regain the five point gap. Shane Horgan was a menace with ball in hand and with Leinster holding their discipline in the face of a strong Connacht offence, substitute Dominic Ryan struck with a breakaway try in injury time to help seal an 18-6 victory.