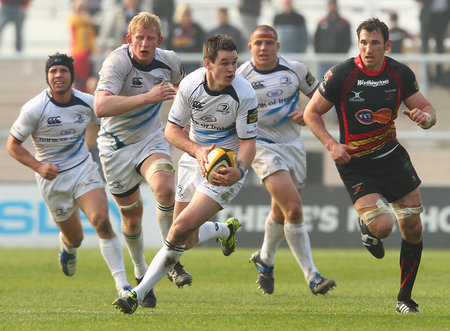 Speaking after the game Leinster Coach Joe Schmidt said: “We’re satisfied to get the win because we knew how tough they’d be. I thought that they were unlucky against Ulster last week and they were a bit unfortunate at times today as well. We didn’t look too cohesive today, which was frustrating.

“It was great to get the win after the Ospreys slipped up in Edinburgh, while Munster did us a favour against Cardiff on Friday night. So we have a bit of a buffer (at the top) but we have to go to Munster next week and that will be another massive challenge.”

Magners Man of the Match Isa Nacewa added: “It was a tough game. We’ll look at the mistakes we made on Monday because we know that we’re going to have to improve against Munster next week, but it was a great day for running rugby.”

Leinster began brightly and a break involving Isa Nacewa and the lively Luke Fitzgerald led to the opening score of the game, a penalty from Jonathan Sexton, to give the visitors a 3-0 third minute lead.

Within two minutes Sexton’s opposite number Jason Tovey had a chance to reply with a three pointer of his own after a Leinster body was adjudged to not roll away at a ruck, but the kick fell wide of the posts.

Again Leinster threatened but Sexton’s difficult penalty attempt in the 12th minute narrowly missed the target. Aled Brew looked dangerous and in the 19th minute the hosts scored the first try of the game when Adam Hughes raced clear up the wing to touch down, with Tovey’s conversion making it 7-3 to the Dragons.

A further successful Tovey kick three minutes later inside the Leinster half extended the Welsh side’s lead to seven points. But the lead was reduced two minutes later when Stan Wright first came close before Isaac Boss bundled over from close range.

Sexton slotted home the extras to level the scores at 10-10 but the see-saw nature of the scoreline continued when Tovey struck his third successful kick – a penalty – to push the Welsh into a three point lead.

As the first half drew to a close Leinster were on the ascendancy and a few barnstorming bursts from Wright, Rhys Ruddock and Fitzgerald almost reaped rewards, but the hosts retained their three advantage into the half time interval.

Leinster picked up after the break where they left off and Sexton’s 43rd minute penalty again levelled the scores, 13-13. A kick by Brew on Isa Nacewa led to Leinster’s second penalty of the half, again slotted home by Sexton from inside the Dragons 22 to push the visitors into a three point lead.

A 53rd minute penalty by Tovey drew the sides level once more but the double substitution of Jamie Heaslip and Nathan Hines almost inspired immediate reward as some fine work from Shane Horgan and Richardt Strauss nearly culminating in a try, though the TMO adjudicated that the ball wasn’t touched down.

Pressure from successive Leinster scrums from the re-start led to a penalty try, converted by Sexton, to make it 23-16 to the province as the game neared the final quarter.

Sexton added a 64th minute penalty, in the process extending the visitors’ lead to ten points, after the Dragons were penalised again at a ruck. Kevin McLaughlin’s 73rd minute burst sparked a further attack as the hosts struggled to contain Leinster and a pass from Fergus McFadden found Dave Kearney who was tackled into touch.