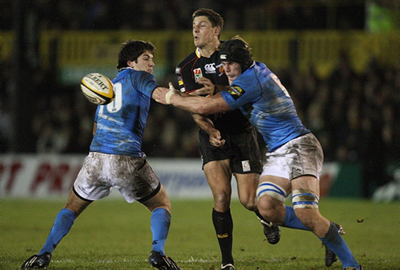 Speaking after the game Leinster Coach Michael Cheika said: "The first half performance was disappointing. We got caught on the hop and nothing went our way.

"It was always going to be tough with the amount of experience we were missing. We had to regroup at the break and I thought we did well in the second half."

The Dragons were awarded a penalty in the third minute but James Arlidge’s strike fell wide of the upright, but the hosts made amends when they raced clear into the corner a minute later to strike through winger Aled Brew after a fast backline move.

Arlidge’s kick again fell wide of the posts, but the hosts took a 5-0 lead.

Immediately from the re-start Leinster rallied and were awarded a penalty, but Fergus McFadden’s difficult kick narrowly missed. The visitors took a hold of possession and were rewarded with their first points, a 14th minute penalty through McFadden, which reduced the deficit to two points, 5-3.

Then in the 23rd minute Arlidge scored an opportunist try when Leinster’s backs were turned to double the Dragons’ advantage to 10-3.

Rhys Ruddock, making his first senior start, carried the ball with conviction for Leinster as did the industrious Stephen Keogh, though it was the boot of Ian McKinley who got Leinster back in with a shout with a superbly executed drop goal in the 28th minute. However almost immediately the Dragons struck back through scrum-half Wayne Evans from close range, with Arlidge converting, to increase the Dragons lead to 17-6.

The Dragons secured their four-try bonus point in the 36th minute through wing Richard Fussell, with full-back Jason Tovey adding the superb conversion, to extend the lead to 24-6 as the half-time interval approached.

Leinster began the second half with great intensity and a McFadden penalty in the 45th minute reduced the Dragons lead to 15 points, but the 18-point difference was restored from the boot of Tovey once more.

The game see-sawed though there was a notable improvement in Leinster’s play in the second half, with McFadden fighting hard for territory in heavy conditions under foot.

But an Arlidge penalty in the 69th minute extended the home side’s lead. Leinster did manage to score a try in injury time through winger David Kearney after he capitalised on a smooth backs move with Eoin O’Malley adding the finishing pass, but it was too little too late.