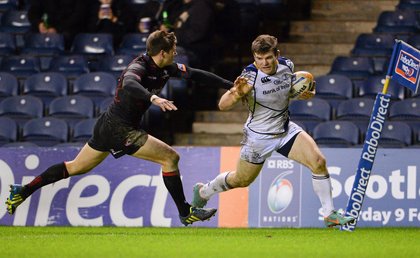 Greig Laidlaw landed a late penalty to make it 17-6 at the interval, but Leinster pushed on with replacement Shane Jennings teeing up the province’s third try for Jonathan Sexton.

Sexton converted his own effort and also turned Ian Madigan’s bonus point try into a seven-pointer. Madigan, another player to make an impact off the bench, took a Leo Cullen pass to dive in by the posts for his fifth try of the league campaign.

With Leinster losing Jamie Heaslip to the sin-bin, Edingburgh prop Willem Nel bounded over for a late consolation try.

The five-point return and improved all-round display, allied to the successful returns of Rob Kearney, Brian O’Driscoll and Luke Fitzgerald, provides a timely boost for Leinster ahead of two crucial rounds of European action.

However, Leinster head coach Joe Schmidt was disappointed that the province did not make more of the possession and territory that they enjoyed during the round 13 encounter.

“To be honest, there were a number of disappointments in our performance in that we had a big possession and territorial advantage particularly in the first half – we had 16 line breaks and scored off only one of them,” said Schmidt afterwards.

“Admittedly, the ground was a bit mucky but we didn’t keep things in order very well. However, I thought the tries were well-constructed

“We had a couple of frustrations at the scrum. We got penalised a few times there when we had the better of them. In the ruck and the carry, we dominated.

“Our passing was crisp. Edinburgh had some good passes as well but we didn’t allow them space. A lot of their good players didn’t get good go-forward ball.”

Commenting on the players who returned from injury, Schmidt admitted: “It was great to have them back. I thought Rob Kearney did very well. He won a couple of balls in the air near the start of the game. But it’s his trademark.

“Luke Fitzgerald did a couple of good things as well and Brian (O’Driscoll) managed to last the whole game out of the three of them. That was a brave effort by him, especially as the ground was a little bit heavy.”

A high tempo first half saw Fionn Carr and D’Arcy, in particular, threaten with ball in hand and the returning Kearney and O’Driscoll also tested the home defence.

An enterprising midfield run from D’Arcy and a strong burst out wide from Carr, who fended off Tim Visser before chipping ahead, were the early attacking highlights for the visitors.

Edinburgh were under further threat after the Leinster scrum won a penalty and Sexton found an excellent touch on the left. However, despite a second advancing scrum, Leinster were unable to force their way over.

The Scottish side took the lead against the run of play, Kevin McLaughlin being pinged for a scrum infringement and Laidlaw mopped up with the opening points.

Leinster attacked with vigour from the restart, Kearney claiming Sexton’s kick and the sidestepping O’Driscoll was felled by a high tackle from Edinburgh prop Allan Jacobsen.

Sexton converted the resulting penalty from inside the 22. The out-half missed his second opportunity from further out after David Denton was penalised for failing to release after making a tackle.

Number 8 Denton then made a costly decision to come in at the side of a Leinster maul that was powering towards the Scots’ try-line, and paid the price with referee Leighton Hodges awarding a penalty try.

Denton was promptly yellow carded before Sexton kicked the conversion from in front of the posts to open up a 10-3 lead.

Leinster kept their foot on the gas and barely four minutes later, backs and forwards combined to set up D’Arcy’s first try of the season.

Sean Cronin barrelled his way through to make the initial incision. Good support saw the ball spread swiftly out to the left for Cian Healy to thread a fine pass to D’Arcy who rounded in past the covering Piers Francis.

Sexton was successful with the conversion and Edinburgh replied in injury-time through Laidlaw, who punished the industrious Sean O’Brien for a ruck offence.

Leinster hunted for a third try early in the second half with Devin Toner and O’Brien driving forward. Heaslip was singled out for obstruction though before Healy crashed over in the right corner.

Edinburgh upped their intensity following Denton’s return from the sidelines and a sturdy spell of forward play led to Francis firing over a drop goal for 17-9.

Leinster responded near the hour mark, replacement Jennings cleverly dummying his way past Matt Scott and Grant Gilchrist and popping a neat return pass to Sexton who finished off to the left of the posts.

The out-half also added the extras to widen the margin to 15 points and set up a push for the bonus point try in the final quarter.

With an amount of ground covered by both sides, space opened up for further chances and Jennings just failed to hold onto Fitzgerald’s pass as Leinster threatened again.

Edinburgh’s Sep Visser, who replaced his injured brother Tim, sparked a lively counter from deep and as the Scots sprung forward during a concerted period of attacking, hands in the ruck from Heaslip saw him sin-binned.

Leinster quickly turned defence into attack though, profiting from a loose Edinburgh lineout. The strong-carrying O’Brien piled forward on a superb 60-metre raid and Edinburgh were taken through phase after phase.

The Scots could not hold out as the newly introduced Heinke van der Merwe and Tom Denton carried well, and Cullen’s inviting pass sent another of the replacements, Madigan, squeezing in near the posts.

Sexton tagged on the conversion to complete his 16-point haul for the night, before Edinburgh had the final say as South African Nel evaded both Jennings and Andrew Conway to gallop through for a 75th minute try.