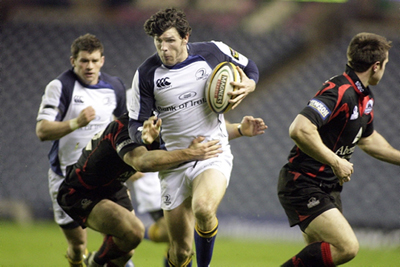 Speaking after the game, Leinster Coach Michael Cheika said: “It was a bad result which has pretty much killed our chances of (retaining) the league.

“In the first half we just weren’t ready for action. You’ve got to be on the hammer from the start, but we only took 50% of our opportunities. We fought our way back in the second half, but it wasn’t enough and there are a lot of disappointed players in the dressing-room.

“A few of the guys who came on did well. I was pleased with Kevin McLaughlin and Fergus (McFadden) did well. We know that (winning) games like these can make us a great team.”

John Fogarty got Leinster’s first try just before the hour mark after some excellent work involving Paul O’Donohoe and the Ireland ‘A’ hooker ploughed through a hole in the Edinburgh defence to touch down after 58 minutes.

Fergus McFadden’s penalty brought the visitors to within eight points of Edinburgh, but Chris Paterson, who kicked 12 points, had the last word with a penalty in the 63rd minute.

The result came at a further cost for Leinster as Simon Keogh picked up a knee strain which will be assessed in the coming days.