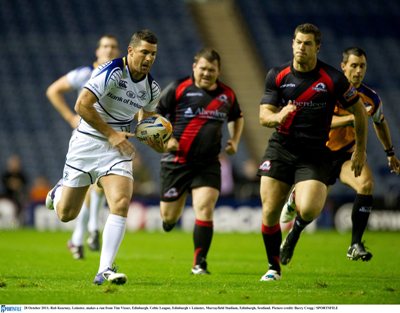 Speaking after the game, Leinster Coach Joe Schmidt said: “I thought that the guys who returned (from the World Cup) showed signs of rustiness. But it was a fantastic thing that a number of the guys got through 80 minutes, such as Fergus (McFadden).

“Rob (Kearney) did well and fought his way through and Leo (Cullen) was the typical steady head in there.

“Any game that you win you’re glad to get out of the system! The league is so competitive and it’s not an easy place to come to and win, so we’re delighted with the result.

“We’ll now turn our attentions to another massive game against Munster in the Aviva (Stadium) next Friday.”

Leinster began brightly but were penalised after an infringement at a scrum which Greig Laidlaw slotted over after 4 minutes to give the hosts an early 3-0 lead.

Leinster, wearing their all white away strip, bounced straight back with David Kearney displaying real power along the touchline to feed his onrushing brother Rob who sprinted between the Edinburgh 10 metre line and their 22 but the Ireland full-back was held up inches from the line.

The Scots were penalised from the ensuing ruck and out-half Jonathan Sexton had little difficulty in levelling the scores with a penalty four minutes later.

With their tails up Leinster probed and a wonderful Isaac Boss break through the Edinburgh midfield was held up metres from the line. Again the visitors were awarded a penalty which Sexton calmly slotted home to double Leinster’s advantage 6-3 after 15 minutes.

The see-saw nature of the game continued though and almost immediately from the re-start Leinster were on the back-foot and Tim Visser exploited a gap in the defence to race clear to score, with Laidlaw converting, to make it 10-6 to Edinburgh two minutes later.

Within two minutes Leinster had the opportunity reduce the deficit to a single point, which Sexton duly did, with his third successful penalty of the evening to leave the scores delicately poised.

Eoin O’Malley put in a typically industrious shift in midfield alongside Fergus McFadden and it was O’Malley’s initial probe inside the Edinburgh 22 in the 25th minute which led to a Leo Auva’a burst who found Boss who sauntered through to touch down and edge Leinster into the lead, with Sexton’s straightforward conversion making it 16-10 to the away side.

The ball resided around the halfway line for the next passages of play and Devin Toner continued his good recent run of form with some crunching hits, but Edinburgh were awarded a penalty, with Laidlaw adding the points, to cut Leinster’s lead to three points after 32 minutes.

Sexton restored the six point advantage, though, with another penalty two minutes later to make it 19-13 as the half drew to a close.

Edinburgh sprinted out of the blocks and within three minutes of the re-start Visser broke some tackles in the Leinster defence to score his second try, with Laidlaw adding the extras, to edge the hosts into a slender 20-19 lead, but a 49th minute strike from Sexton pushed Leinster into a 22-20 advantage.

Laidlaw restored the hosts’ lead with another three-pointer in the 56th minute but a wonderful break from substitute Richardt Strauss led to a ruck metres from the try-line and Dominic Ryan then found Boss who passed to Rob Kearney who released Auva’a to score his first try in Leinster colours in the corner on the hour mark.

Sexton’s difficult conversion attempt fell agonisingly wide of the upright but nonetheless Leinster regained the upper hand with a 27-23 lead. Some more pressure applied first through Auva’a and then by sub Rhys Ruddock led to another Leinster penalty and Sexton added his 20th point of the evening to extend his side’s lead to seven points before a 70th minute drop goal made it an even ten point advantage, 33-23.

A minute later and the game was back in the balance when Edinburgh centre Matt Scott gathered a chip through from out-half Harry Leonard to score to reduce Leinster’s lead to five points, but McFadden’s last minute penalty sealed a fine win.