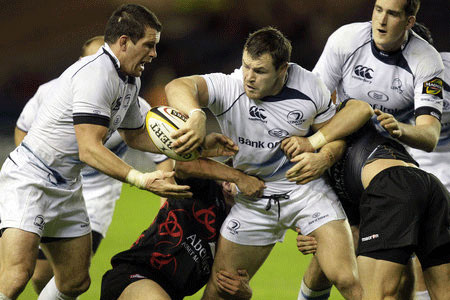 Speaking after the game Leinster Coach Joe Schmidt said: “It was a disappointing effort from us tonight and Edinburgh were a bit more desperate (for the win) than us.

“The intention was there from us, but when they got on top they bullied us. We didn’t play a lot in our half and because of that we couldn’t set a platform. Credit to Edinburgh, they looked after the ball pretty well throughout.

“Johnny (Sexton) trained all week and the last minute change didn’t help, but it was not about one player. We know that we have to roll up our sleeves and work really hard from Monday morning because Munster have been in excellent form so far and it will be a massive challenge for us.”

Chris Paterson kicked the hosts into a 3rd minute 3-0 lead when he slotted home a penalty, before Isa Nacewa struck the first of three successful penalty efforts by the visitors, two by the out-half on 5 and 13 minutes with Rob Kearney launching a huge penalty 10 metres inside his own half.

Leading 9-3 Leinster held the upper hand but a 22nd try from Geoff Cross, after a clever assist from Scotland scrum-half Mike Blair, converted by Paterson, gave the hosts a slender one point advantage.

Nacewa’s third successful penalty of the night on 26 minutes pushed Leinster into a 12-10 lead which they held into the interval despite Tim Visser coming close to scoring in the corner after 34 minutes before he was denied by a thunderous Dominic Ryan tackle.

Edinburgh began the second half strongly and crossed for tries through Visser and Mark Robertson in quick succession, the latter converted by Paterson.

On the hour mark out-half David Blair sealed the bonus point for Edinburgh with a quick tap and go in the corner which he impressively converted to make it 29-12.

An 80th minute try from Kearney, celebrating his 100th provincial appearance, after he was released by centre Gordon D’Arcy came too late as time ran out and Ian Madigan’s difficult conversion attempt fell wide as Leinster bid to seal a last gasp losing bonus point.