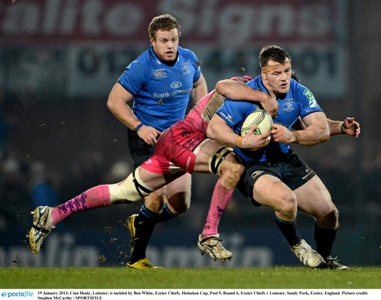 Leinster finished the Heineken Cup pool stages with a second successive bonus point victory, but they face an anxious wait to see if the result in Exeter is enough to earn them a quarter-final berth…Joe Schmidt post-match reaction…

Gordon D’Arcy’s third-minute try set the tone for a fast-paced opening from the defending European champions, amid a real buzz of anticipation at Sandy Park.

The Leinster forwards ate away at the Chiefs’ defensive line for a second try on the right, with Rob Kearney sweeping through from Jonathan Sexton’s final pass in the 27th minute.

Exeter though matched Leinster’s try tally in the first half, two lineout mauls earning a score for hooker Neil Clark and a penalty try.

The visitors’ defence creaked alarmingly on both occasions and seven points from the boot of Gareth Steenson left Leinster 17-12 in arrears at the break.

The Chiefs never gave up and pulled themselves back within striking distance in a helter-skelter finish. Steenson closed the gap to 26-20 as the tournament newcomers hunted for a match-winning try.

Leinster had to work through some strength-sapping phases in defences, but made certain of the win with a 74th minute penalty from Sexton.

The five-point return sees the province finish in the second place in Pool 5 with 20 points. As things currently stand, they will qualify for the last-eight as one of the best runners-up, although their destiny will be decided on Sunday following the completion of the other pools.

Speaking afterwards, Leinster head coach Joe Schmidt said: “We are where we are. We can’t control anything else that happens. There certainly won’t be any celebrating from us because we know that Munster have a real target.

“That is one of the advantages of playing on the Sunday as they know clearly what they have to chase. They’ll clearly work really hard and make sure that they get as close to that as possible against Racing.

“We knew how tough it was going to be to come here and get the five points, which was the minimum we required.

“I thought we were really good for it, and the quality of our tries was first rate, but I have a lot of respect for Exeter as well.”

Leinster made early headway in Devon by winning a couple of set piece penalties, the second allowing out-half Sexton to boot the visitors into the Exeter 22.

A lineout maul led to forceful carries from captain Leo Cullen, Kevin McLaughlin and man-of-the-match Cian Healy and the half-backs spread play to the right where D’Arcy stepped inside a tackle to score.

Exeter hit back on the quarter hour mark, using a close-in lineout drive to spring Clark through for a well-taken try that Steenson converted.

A raid up the right wing from Sean O’Brien, allied to a scrum won against the head, got Leinster back on track and Exeter captain Tom Hayes had to react smartly to halt Healy’s drive close to the whitewash.

Exeter held out at a series of five-metre scrums, but two sumptuous passes on the move from O’Driscoll and Sexton put try scorer Kearney over near the right corner flag.

Sexton was unable to convert and as the game’s searing pace continued, Exeter succeeded in responding again – this time with a penalty try.

As Dean Mumm and Sireli Naqelevuki grew in influence, the Chiefs kicked a penalty to the corner. Hayes and company mauled up towards the line and referee Romain Poite ruled that Leinster brought the drive down illegally, resulting in a penalty try. Steenson’s conversion moved the hosts ahead.

The former Ireland Under-21 international tagged on a late penalty, following a loose Leinster lineout, as the English side went in at the interval five points clear.

On the restart though, Leinster re-established their dominance of possession and territory and they wasted little time in scoring try number three.

They benefited from some patient and incisive build-up play, with Luke Fitzgerald and Cullen involved twice, and the latter’s inviting inside pass was gobbled up by O’Driscoll for his 32nd Heineken Cup try.

Sexton converted and also added the extras to Leinster’s bonus point score, a 52nd minute rumble under the posts from number 8 Heaslip.

He broke off the back of a five-metre scrum to crash over for a seven-pointer and with plenty of time left and Exeter looking tired, Leinster seemed poised to boost their try count.

The closing quarter did not pan out that way though as this proud Exeter outfit dug deep and played their way back into contention. A concerted spell of pressure yielded three points for Steenson.

The sin-binning of replacement flanker Ben White for repeated ruck offences did not deter the home side, for whom bustling centre Naqelevuki had a fine game.

Leinster wrestled back control to win a central penalty which Sexton popped over, widening the margin back to nine points.

With time not on their side, the victors were unable to fashion a late fifth try and finished the match with 14 men due to the yellow card picked up by replacement Isaac Boss.