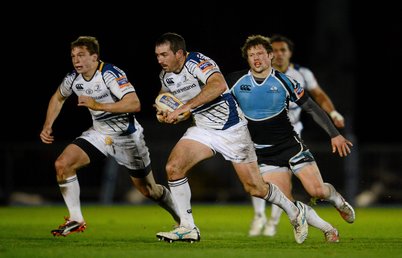 Leinster gained a valuable four points on the road against one of the PRO12’s in-form teams, relying on some hugely committed defence to keep Glasgow out late on.

Leinster created the majority of the try-scoring opportunities – particularly in a more entertaining first half – but they were missing the final pass or a piece of attacking invention to unlock the Scottish rearguard.

The early signs were good for the visitors, a solid scrum winning a left-sided penalty which out-half Ian Madigan tucked away for 3-0.

Returning duo Isa Nacewa and Sean O’Brien featured prominently in the opening passages of play, the latter setting up Isaac Boss for a smart kick chase that won an attacking line out. There were counter attacks at both ends of the pitch during a lively first 10 minutes.

Leinster began to crank up the pressure towards the end of the first quarter with Brendan Macken held up just short of the try-line after a promising period in the Glasgow 22.

The openings continued to come for the men in white, with Fionn Carr threatening five metres out and new centre Andrew Goodman piling through the middle on a powerful run.

Glasgow scrambled back to thwart both attacks though, and their skipper Chris Fusaro also did well to nab a crucial steal as Leinster pressed.

Nacewa was bundled into touch on the left following a swift counter initiated by Boss and the ever influential Shane Jennings.

Glasgow were down to 14 men when lock Tom Ryder came through illegally at a ruck. However, Leinster were unable to score while he was off the pitch – their best opportunity was the resulting kick at the posts which Madigan sent wide.

As the rain grew heavier, Glasgow gritted their teeth and managed to keep the deficit at three points up to half-time. A flat pass from Aaron Dundon sent Nacewa hurtling through over halfway.

He was hauled down in the right corner and Leinster were guilty of going off their feet at a subsequent ruck. Devin Toner was introduced for Quinn Roux before the break, the South African second row having fallen heavily on his shoulder at a lineout.

The second period saw a dip in quality as both sides made a series of unforced errors and coughed up sloppy turnovers.

Leinster carved out the first scoring chance as O’Brien passed for the onrushing Nacewa on a neat switch move.

Fusaro was duly sin-binned for killing ruck ball near his line and Madigan made no mistake with the penalty kick from the right. 6-0 down, Glasgow regrouped and enjoyed some better possession in Leinster territory as the half wore on.

With conditions deteriorating, Warriors centre Peter Horne pushed a penalty effort away to the left. He then miscued a three-point attempt from closer in, awarded for a scrum decision against Jamie Hagan.

Just past the hour mark, Jack McGrath was whistled up for a scrum offence but Glasgow replacement Scott Wight’s left-footed kick curled just past the right hand post.

It was also heartening to see back rower O’Brien last the full 80 minutes, playing his part in what was ultimately a hard slog for the province.

They defended manfully in the closing stages as the Warriors came at them on crash balls and out wide. The young front row combination of Jack O’Connell, Sexton and Martin Moore also coped well in the set piece.

Madigan saw yellow in the dying seconds, but Leinster came away with the hard-earned spoils as they repelled the hosts’ final throw of the dice.