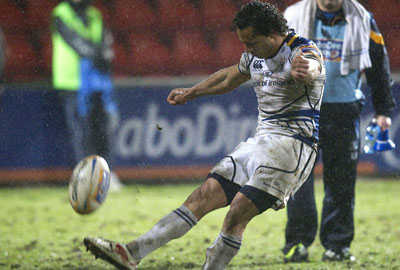 In rain-soaked conditions, Ruaridh Jackson’s 30th-minute penalty was the only score registered in the first half as Leinster were left trailing 3-0.

The Warriors increased their advantage with a penalty try early in the second period, but a converted Heinke van der Merwe try and Isa Nacewa’s 71st-minute penalty ensured a stalemate between these regular rivals.

This was Leinster’s fourth meeting of the season with Glasgow following a 23-19 home defeat back in September and two pool wins in the Heineken Cup.

Ian Madigan had the first chance to open the scoring but was unfortunate to see his penalty, from just inside the Glasgow half, bounce back off the right hand post.

Leo Auva’a was heavily involved in an early bout of strong carrying from the Leinster forwards, with Madigan kicking a couple of well-judged touchfinders.

It was a stop-start and attritional opening period dominated by the whistle of referee John Lacey, and turnovers and handling errors spoilt some promising moves for both sides.

Amid a heavier rain shower, Dominic Ryan infringed at a scrum and Glasgow number 10 Jackson was able to swing over the right-sided penalty.

A solid scrum hit from Leinster forced Glasgow hooker Pat MacArthur to pop up, setting up a second long range penalty for Madigan who pushed his effort to the right and wide.

A late challenge by Ryan Wilson on Madigan produced a third penalty within kicking range. But this time Nacewa slipped during his run-up and his kick failed to clear the crossbar.

There was little between the sides at the start of the second half but the penalty try put Joe Schmidt’s men under increased pressure as they struggled to find their usual rhythm.

The Warriors put together a flowing move down the left wing, with captain Rob Harley gaining ground, and hooker MacArthur was knocked into touch at the corner flag by Nacewa’s last-ditch tackle.

Television match official Jim Yuille ruled that MacArthur had failed to ground the ball, but a penalty try was awarded for Nacewa’s ‘no arms’ challenge and the full-back was also sin-binned.

Jackson converted for a 10-0 lead which brought about a rapid response from the table toppers.

Isaac Boss’ clever kick towards the left corner led to a lineout steal from influential replacement Devin Toner, and Boss was then held up just metres out.

But, just couple of phases later, van der Merwe burrowed over for his second ever league try with support from Toner. Madigan added the extras for a 10-7 scoreline, teeing up a well-contested final quarter.

The Scots, with lock Tom Ryder in man-of-the-match form, enjoyed some decent territory in the closing stages but Leinster defended doggedly in difficult conditions and carved out the final scoring opportunity.

Nacewa managed to bring Leinster level from the kicking tee, rifling over a penalty with his right boot. Neither side could trouble the scoreboard in the final minutes, with young replacements Andrew Conway, Jordi Murphy and John Cooney helping Leinster see out the result.

The two league points garnered from this game maintains the province’s stranglehold on top spot and stretches their unbeaten run in all competitions to 19 matches.