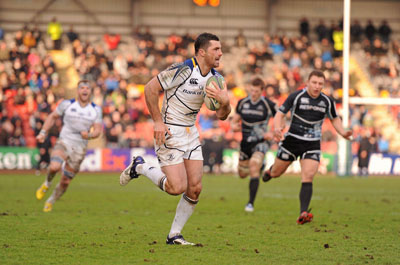 The Pool 3 leaders finished this game with 14 men following Sean O’Brien’s late sin-binning, but exerted enough control of possession in the dying minutes to earn their fourth win of the tournament.

The Celtic rivals were tied at 6-6 after a bruising first half, Jonathan Sexton and Fergus McFadden both kicking penalties in response to two well-struck shots from Duncan Weir.

A converted try for replacement scrum half Colin Gregor got Glasgow back on terms and set up a tense finish, but Isaac Boss came off the visitors’ bench to twist his way over for the match-winning try with just over 10 minutes remaining.

Speaking afterwards, Leinster head coach Joe Schmidt said: “I’m delighted to get the result today. We knew the game would be a battle of attrition and that’s pretty much the way it proved.

“I know there were imperfections in the performance and I know my players have gone on record saying I’m always fussy.

“I don’t really care about the imperfections today. I just think you deserve to be proud of what you did.

“You deserved to get the four points and we’ll come away from this, glue ourselves back together in six days’ time and front up at the RDS in front of a full stadium and try to chase that home quarter-final that we really, really want.”

In the opening exchanges Sexton showed a good turn of pace on a smashing break out of the Leinster 22, however Glasgow took an early lead when their out-half Weir punished a scrum infringement.

Rob Kearney and Isa Nacewa initiated a couple of long range counter attacks before the Warriors built a platform up front with the likes of Richie Gray, Al Kellock and Ed Kalman propelling them forward.

Quick ball saw Weir and Graeme Morrison keep the Scots on the front foot, but Leinster’s defence coped comfortably with the threat as Devin Toner impressed in the lineout.

A neat interchange with Jamie Heaslip at the front of a lineout led to man-of-the-match Sean Cronin charging down the right touchline. Shortly afterwards, Sexton’s first penalty effort just edged the wrong side of the right hand post.

He was on target though in the 28th minute, firing over from halfway to bring Leinster level, before Stuart Hogg provided the momentum to set up Weir’s second successful penalty.

The Kearney brothers, Rob and young Heineken Cup debutant Dave, popped up in possession as Leinster tried to respond.

They cranked up the pressure through a series of strong carries into the Glasgow 22, a leg-pumping Cian Healy drawing his side to within metres of the try-line.

Cronin was then held up inches short of the home whitewash. Glasgow pinched the ball at the resulting scrum, but Leinster battered away at the Warriors’ defence until McFadden, kicking while Sexton received treatment, squared things up in injury-time.

Leinster increased the intensity for the start of the second period, taking the direct route before Rob Kearney timed his jump perfectly to gather Sexton’s kick into the right corner and run in his third try in the pool stages.

McFadden sent over a terrific conversion to move the visitors 13-6 ahead, yet Glasgow were quick to respond through the boot of Weir once again.

O’Brien got a lovely offload out of the tackle away to Gordon D’Arcy who linked with McFadden as Leinster powered towards the Glasgow line again.

Kalman dropped his bind at a subsequent scrum, allowing McFadden to slot a close-in penalty, and the goal-kicking centre increased his influence with a fine side-stepping run from deep.

Into the final quarter, Glasgow turned down a kickable penalty and the decision paid off in the form of a 62nd minute try.

Their forwards initiated a catch and drive and although Leinster held them out, Colin Shaw’s deft pass out of the tackle put replacement Gregor over in the left corner.

Weir delighted the vocal home support by adding the difficult conversion, levelling the sides at 16-16, but the concession of that score brought about a spirited response from Leinster.

A number of replacements made an impact, Eoin O’Malley, Rhys Ruddock and Heinke van der Merwe carrying with great intent after a crucial turnover from O’Brien in front of the Glasgow posts.

A drive from van der Merwe was brought down just metres out, before Boss spun away from Troy Nathan’s challenge to lunge over and touch down just inside the right hand post.

After confirmation of the grounding from television match official Derek Bevan, McFadden added the extras to push Leinster’s advantage out to seven points again.

Ultimately it was enough to see out the result, the province working hard in defence to repel Glasgow’s late assaults on the try-line.

They kept the Scots out despite having O’Brien yellow carded for a ruck offence inside the Leinster 22. Boss helped win a subsequent penalty and when possession was reclaimed, a series of pick and goes wore down the clock before Sexton found touch for full-time.