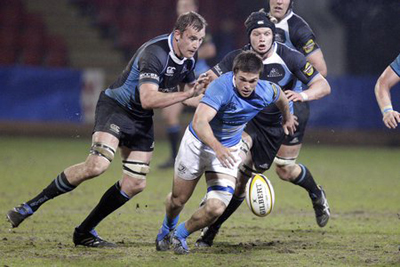 Speaking after the game Coach Michael Cheika said: “I never thought I’d be pleased with a 30-6 loss but I couldn’t be prouder of the team. Their coach had said earlier in the week that nothing less than five points would be good enough, but the lads showed what playing for Leinster means to them.

“We were really disappointed with the referee and he didn’t get much help from the officials. I’m more disappointed for the young guys who put their hearts and souls into the game. We can be inspired by the effort and attitude tonight. We’re still on top of the league and the Edinburgh game will be an important one for us.

“We’re going to have to overcome a Toulouse squad next week who are probably going to be going into the game as favourites. We will take a lot of self-belief from this game and that (performance) will charge us up for next week.”

Leinster were the better side going into the interval and were unlucky to be 13-6 behind in a half full of passion and grit, exemplified by the industry of the excellent Rhys Ruddock, Dominic Ryan (an early replacement for Paul Ryan who fractured his fibula), the defensively excellent Michael Keating and the experience of Trevor Hogan.

Eoin O’Malley continued his recent good run of form with another strong performance, but it was Glasgow who edged into the lead with a Bernardo Stortoni try, converted by Dan Parks after 22 minutes. Some good work by Ronan McCormack, Hogan and O’Malley earned the visitors a 28th minute penalty which Ian Madigan slotted home to reduce the deficit before the full-back slotted home a thunderous penalty three minutes from inside the Leinster half.

Parks replied with penalties on 35 and 38 minutes to give Glasgow a 13-6 half time lead.

With Dominic Ryan harshly in the sin-bin on a night of dubious official decisions just before the break, he was followed by Hogan on 44 minutes as Parks stretched Glasgow’s lead with his third penalty of the evening on 50 minutes.

No sooner had Ryan returned to the action when Rhys Ruddock was adjudged to have infringed and he too spent time on the sideline. A Rob Dewey try in the 62nd minute, converted by Parks, pushed The Warriors into a 23-6 lead and eight minutes later it was Mike Ross’ turn to make it a staggering four Leinster yellow cards on the night.

Dewey scored his second try in injury time, again converted by Parks, as the Warriors chased a bonus point, but Leinster, though understandably deflated, defended resolutely to the end in an all-round brave and spirited performance.