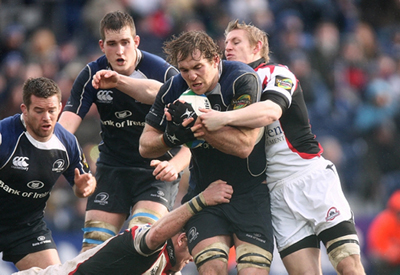 Speaking after the game, Heineken Man of the Match Rob Kearney said: “Nobody is more frustrated than the backline by the lack of tries, but we showed a lot of character out there again today. We have improved in certain areas, but we know we’ll have a lot of work to do.

“Regardless of who we will be coming up against, an away quarter final will be a huge test for us. No-one was too sure of the permutations going into the match, and it was a disappointment not to get a home quarter final for our supporters, but we’re still in the competition and we’re delighted about that.

“Wasps’ defeat today showed how strong Castres are and the thing about playing away is that you have to up your game. We will need to do that, but we’re pleased to be still in there fighting.”

All the points came in the first half with Felipe Contepomi landing four Leinster penalties and Chris Paterson replying for Edinburgh.

Brian O’Driscoll and Rob Kearney produced superb breaks but poor handling in desperate conditions which deteriorated during the first half virtually until the end of the game, prevented any Leinster tries.