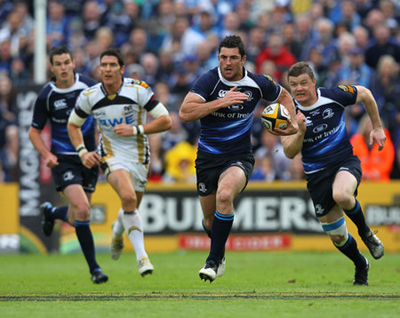 Speaking after the game departing Leinster Coach Michael Cheika said: “Rugby’s not a fairytale and there are no guarantees. The better team won today. They took us early and we fought back and even though we weren’t playing well we hung in there til the very end.

“I thought that we actually went alright in the first part of the first half and we turned the ball over a few times, but they had a couple of moments when they showed their class. I’m proud to be part of a team that never lies down. We have shared our successes and our disappointments and even though life is hard sometimes, it’s not cruel.

“I’m lucky to have been part of a great club and even though there’s disappointment, it won’t dent my memories of the time (spent) here. It was very testing in the dressing-room because all of the guys are going their separate ways, but I have done the best I can.”

In a see-saw game it took a superb piece of work from the Ospreys to open the scoring after 19 minutes when Tommy Bowe capitalised on some excellent incisive work by Mike Phillips, Dan Biggar and finally centre Andrew Bishop. Biggar added the points and the visitors took a deserved 7-0 lead.

Two minutes later Jonathan Sexton opened his account for the evening with a penalty after a high tackle on the influential Rob Kearney to reduce the advantage to four points, but on the half hour mark Leinster suffered a blow when Kevin McLaughlin left the field with what appeared to be a serious looking knee injury.

His replacement Stephen Keogh carried the ball effectively in his place, with Gordon D’Arcy impressing greatly with his tenacity and bravery with the ball in hand. Just as Leinster appeared to be holding the advantage, Lee Byrne struck in the 35th minute, with Biggar again converting, to give the Ospreys a 14-3 half time lead.

Sexton kicked a 44th minute penalty, which Biggar replied three minutes later, before Sexton kicked two more penalties on 61 and 70 minutes to bring Leinster to within a converted try of sealing the Magners League title.

Alas, though, it wasn’t to be and the Ospreys held on to seal the title in front of a packed house in the RDS.