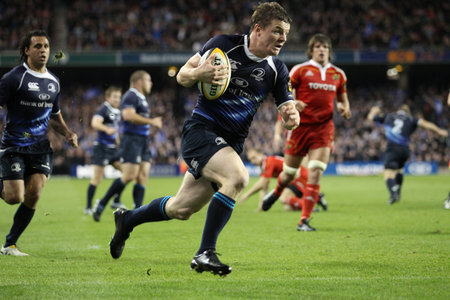 Speaking after the game Leinster Coach Joe Schmidt said: “It was a great arm-wrestle and we didn’t expect any less. I have to say that I’m delighted with the win. We opened them up a few times in the second half, but they had massive territorial dominance in the first half.

“I have to pay tribute to Munster who put two or three phases together consistently early on. I thought our defensive effort was fantastic and that put us on the front foot.”

Brian O’Driscoll added: “It was nice to get on the scoresheet but the most important thing was the win. It was a huge performance by us and the pack really performed well. Defeats can knock your confidence a little, but we were delighted to come back from behind in the manner in which we did.”

Munster out-half Ronan O'Gara kicked the visitors into an early 3-0 lead in an opening salvo which was epitomised by guts, grit and determination on both sides. A scorching break from Isa Nacewa in the 20th minute found Gordon D'Arcy who was halted on the line, but Leinster's spell of pressure was rewarded three minutes by a penalty from the boot of Isa Nacewa.

Munster wing Johne Murphy went close to scoring a Munster try before the break but the ball just beat him to touch after he had kicked on a chip through from scrum-half Tomas O'Leary.

With both sides enjoying varying spells of dominance it was no surprise that the scores remained level at the interval. Rob Kearney was strong in attack, as was his Ireland colleague O’Driscoll, while an immense forward effort spear-headed by Sean O’Brien gave Leinster dominance in the early exchanges of the second half.

O’Gara and Nacewa traded second half penalties before O’Gara’s third successful kick of the night in the 56th minute gave Munster a 9-6 lead. With Richardt Strauss and Devin Toner linking soundly at lineout time, and Gordon D'Arcy and Luke Fitzgerald asking questions of the Munster rearguard, the game began to open up.

But once more it was O'Brien who was the spark for the hosts and his wonderful vision found the onrushing O'Driscoll who raced in to score the opening try of the game in the 70th minute.

Nacewa's sweetly struck touchline conversion gave Leinster a 13-9 lead and the hosts held on to seal a deserved victory on an historic night for the province, backed by a record crowd of over 50,000 in the Aviva Stadium.