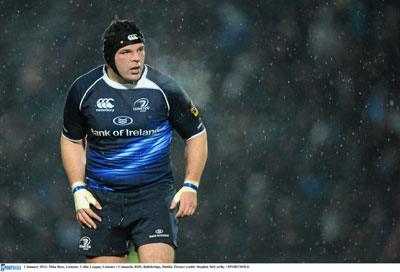 Speaking after the game, Volkswagen Man of the Match Jonathan Sexton said: “We’ll be the first to admit that the performance wasn’t great but we’re glad to get the result and we can now concentrate firmly now on next week.

“They made it very difficult for us and we know how good a side the Ospreys are, so we’re happy to get the win, but we know that we’ve a completely new competition and a different challenge next week (against Saracens).”

Dan Biggar kicked the visitors into an early 3-0 lead with barely two minutes on the clock as the Ospreys shaved the opening salvos and but for some brave defence Leinster could have been further behind but the time Jonathan Sexton had kicked the first of his 15-point haul two minutes later.

Sexton extended the lead in the 10th minute, but the Ospreys were threatening and eventually skipper Justin Tipuric crashed over from close range five minutes later, with Biggar adding the points, to make it 10-6.

Leinster rallied and Shane Horgan and the returning Luke Fitzgerald displayed real tenacity in soggy conditions underfoot. Some good work from Devin Toner and the abrasive Cian Healy propelled Leinster further on as the half drew to a close with Sexton's third penalty of the evening in the 40th minute giving the visitors a slender 10-9 half-time advantage.

Playing their 50th competitive game in front of a strong RDS following once more, Leinster pressed and Sexton's 48th minute penalty pushed the hosts into the lead before he added his fifth successful strike in the 57th minute as Leinster strengthened their grip.

With try scoring opportunities at a minimum it was a performance of composure and patience, two attributes the hosts displayed throughout. The Blues' most potent try-scoring threat was quelled on the hour mark when Sexton's speculative kick over the top of the head of Ospreys wing Nikki Walker found Fergus McFadden who hacked ahead only to be denied by the Welsh side'sdefence.

It was a gritty evening, but a hugely satisfying result nonetheless.