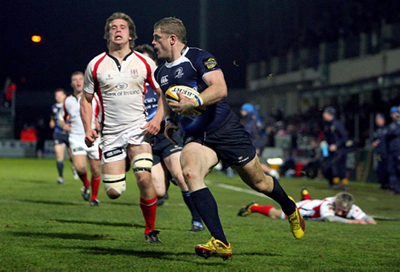 Leinster continued their recent run of good form with a dogged 15-3 victory over Ulster in the St. Stephen’s Day Magners League derby at the RDS on Saturday evening…Rob Kearney Post Match Reaction…

Speaking after the match, Rob Kearney said that the squad were pleased with the win, but not the performance: "Although we got the win, to be honest the boys aren’t that happy with how we played. We gave the ball away too cheaply and we didn’t respect the ball enough in possession.

"Ulster stopped us playing, and their line speed was very good. We’re right where we want to be in terms of a top four place, but we also have a lot of work to do in Europe, so we won’t be letting up.

"We felt that we probably let ourselves down but it was important to get a win ahead of another massive game next weekend in Galway."

In a scrappy game, where chances for either side were few and far between, it took a moment of magic to break the try deadlock after Shaun Berne had kicked the hosts into an early 10th minute 3-0 lead.

Niall O’Connor clawed Ulster back into the game with a 35th minute penalty to level the scores before a lineout in the 38th minute found Berne who linked superbly with Gordon D’Arcy whose deft offload to the onrushing Rob Kearney propelled Leinster into an 8-0 advantage.

Berne’s conversion was a success into the North Stand and the hosts led 10-3 at the interval.

Kearney then turned provider for the hosts in the 46th minute when he broke and passed to Jamie Heaslip whose excellent hand-off enabled him to score a try. Berne’s conversion fell narrowly wide of the upright, but it was a lead that Leinster held on to for the rest of the game to keep pace with the Magners League pace-setters.