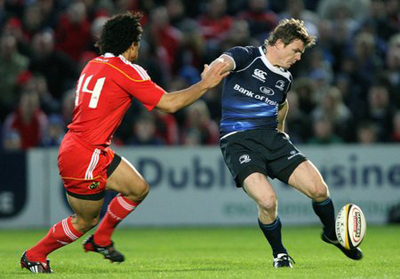 Speaking after the game, Magners Man of the Match Jamie Heaslip reflected: "It was another hard fought battle and we’re delighted to get the win and we’re in contention for a bit of silverware, so we’re happy.

"For the past couple of seasons we have worked very hard on our defence with Kurt (McQuilkin) and we again showed that today. Not many teams come through us, but credit to Munster because they came at us right until the end.

"They’re a top quality side and we’re lucky that it’s us who have come out on top. The lads really dug deep and we’re looking forward to facing the Ospreys in what should be a great game. They’re a fantastic side right across the park."

In what was a keenly contested first half, the scores were tied 3-3 after an 18th minute Jonathan Sexton penalty was negated by Ronan O’Gara’s 29th minute penalty.

With chances few and far between, neither side dominated a physical and enthralling encounter with the forwards, and the inflential Jamie Heaslip and Shane Jennings excelling, while Cian Healy enjoyed another fine evening both in the set piece and in the loose.

The score remained a 3-3 at the break to leave the match perfectly poised for the second period. Munster edged ahead 10 seconds after the resumption as O’Gara slotted a long-range drop goal, but Leinster roared back and three minutes later Rob Kearney secured a wonderful loop around from Sexton, who excelled on his return to action, and the Carlingford man darted in to score.

Sexton added the tricky conversion to extend Leinster’s lead to seven points. Tomas O’Leary’s high challenge on Cian Healy stopped a certain touchdown and Sexton kicked the three points to extend the lead further on 52 minutes before Sexton kicked a 63rd minute strike to seal the win and set up a Magners League Grand Final against the Ospreys in a fortnight’s time.

*Ticket details for the Grand Final will be available on www.leinsterrugby.ie in the coming days.