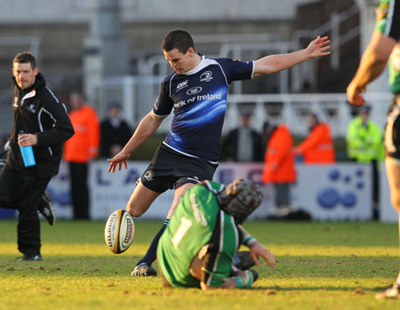 Speaking after the game a frustrated Michael Cheika said: "Over the balance of play I think they probably deserved to win. They dominated the contact area but I was pleased that we showed good character to get into a position where we could win the game.

"It’s gonna make for some hard viewing and if we think we can play like that again then we have another thing coming. They dominated the contact area and it’s like we lost in the dressing-room."

The visitors got off to a dream start when former Leinster winger Fionn Carr sprinted through the Leinster rearguard to touch down in just the 2nd minute. Miah Nikora added the points and Connacht led 7-0. Jonathan Sexton kicked a penalty to reduce the deficit to four points two minutes later, but the respite was temporary as Connacht turned the knife and were further rewarded when Carr crossed for his second try after 22 minutes.

Nikora added the conversion again and in brilliant sunshine in the RDS the home side were straring down the barrel.

Credit to the mental fortitude of Leinster, a superb Shane Jennings break found Eoin Reddan whose pass to Shaun Berne unlocked the Westerners’ defence and enabled the impressive Rob Kearney to race clear to score on the half hour mark.

Trailing 14-8 at the interval Leinster needed a reaction and got it once more from the boot of Sexton who added his 42nd strike to a 70th mintue effort which levelled the scores.

Unsuccessful drop goal attempts on either side almost snatched the win before reland out-half Sexton stepped up to complete the sweetest of kicks in the closing minutes of the game 40 metres out to extend Leinster’s lead at the top of the Magners League to four points ahead of the trip to Thomond Park next Friday night.