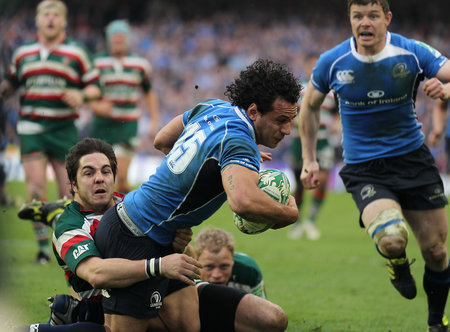 Speaking after the game, Heineken Man of the Match Richardt Strauss said: “We knew that it was gonna be tough and we had to work hard. It was a hugely intense and physical battle and we all really appreciate the crowd who were great throughout.

“They (Leicester Tigers) have a good pack and a lot of experience in this competition so we had to dig deep at times. Thankfully our hard work paid off and irrespective of who we now face, they’re both two tough opponents.”

Leinster got off to a strong start and after some superb play from Luke Fitzgerald who gathered the ball well to feed the onrushing Kevin McLaughlin, and from the ensuing move the hosts were awarded a penalty which Jonathan Sexton slotted home to make it 3-0.

Toby Flood levelled the scores with a penalty two minutes later, but Leinster rallied and Sexton’s penalty sailed over the posts via two deflections off the sticks in the 14th minute.

A wonderful Mike Ross break four minutes and some clever play by the industrious Brian O’Driscoll almost reaped the Blues’ first try, but the Tigers rearguard stood strong, though not before Sexton added his third successful strike in the 36th minute following an outstanding Richardt Strauss burst.

Leinster took a deserved 9-3 into the half time interval but the English visitors began the second period brightly with Alesana Tuilagi denied a try when he was tackled into touch by Sean O’Brien in the 42nd minute.

That decision was confirmed by the TMO, but the warning signs were clear, but six minutes later Leinster broke they try deadlock when Shane Horgan found Isa Nacewa whose wonderful dummy fooled the Tigers defenders and he displayed a great turn of pace to crash over and make it 14-3.

Sexton’s conversion fell wide of the upright, but Leinster were on the rise and their successive attacks were thwarted as the home side gained dominance in the set-pieces, with Kevin McLaughlin and influential skipper Leo Cullen constant threats at lineouts.

Sexton added a 74th minute penalty as he continued his fine run of form but Leinster had to contain a potent Tigers onslaught near the end as substitute hooker Rob Hawkins crashed over, with Flood converting, to leave the scoreline 17-10.

But Leinster withstood the pressure to seal a deserved win and a meeting with either Biarritz or Toulouse in the Heineken Cup semi final.