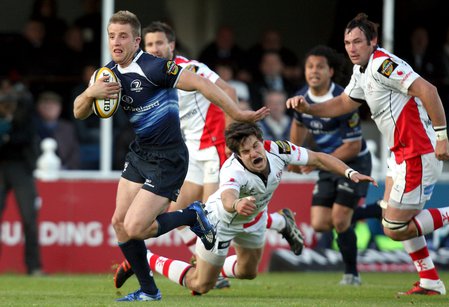 Speaking after the game, Magners Man of the Match Sean O’Brien said: “It was a tough game and we knew to expect that with them coming down here.

“I thought that they brought a lot of intensity in the first half and we knew that we would have to dig deep and try to outrun them a bit.

“Whenever you chop and change (substitutions) it can take a few minutes to get back into the groove and the pressure was on us at stages, but I thought the boys worked very hard.

“Even though we’re in a position to win trophies deep down right now we know that we have won nothing yet.”

Jonathan Sexton kicked Leinster into an early 3-0 lead after some good work by Isaac Boss in what was a keenly contested opening period.

Though try-scoring opportunities were minimal for either sides, it was the hosts who came closest in the tenth minute when Fergus McFadden's strength found the busy Richardt Strauss whose burst deep into Ulster territory almost released Luke Fitzgerald, but the pass fell inches from the winger's hands.

It was a signal of intent from Leinster and eventually they broke the try deadlock when some good initial work from Gordon D'Arcy and Sean O'Brien found Brian O'Driscoll whose clever offload to Isa Nacewa found McFadden who raced clear to score in the corner at the South End of the ground.

Sexton's difficult conversion struck the posts but he made amends with a penalty on the stroke of half-time to give the Blues an 11-0 half time lead.

A raft of substitutions by Leinster meant that they took a bit of time to find their feet early on and a long penalty punt from Ruan Pienaar inside his own half on the hour mark reduced the advantage to eight points.

But one of a series of Stan Wright bursts in open play found the dangerous Luke Fitzgerald after 71 minutes and he took a great line after an Eoin Reddan pass to beat the Ulster defence and touch down.

McFadden had little difficulty slotting home the extras and Leinster held on to seal the win and set up a final against the winners of Munster/Ospreys on Saturday evening.