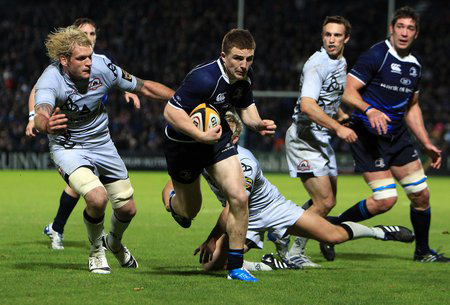 Speaking after the game, Leinster Coach Joe Schmidt said: “I’m really with that win and to go through October with five wins out of five is exactly what I would have wanted.

“Our game-plan tonight was to go out and attack but credit to Edinburgh. They’re a very good side who are very hard to stop.”

Nathan Hines added: “Edinburgh are a hard team to play against. They play a fast, wide game so considering that we were down a few bidues tonight, we’re pretty happy to get the win.

“We have a good squad that rotates from time to time, but credit to the young guys who are up to speed and (who) are taking their chances when they come along.”

Isa Nacewa, who put in another impressive performance, kicked the hosts into an early 3-0 lead after three minutes as Leinster edged the opening exchanges, but Tim Visser’s electrifying pace helped Edinburgh into the lead when he darted clear to score five minutes.

Nacewa then edged Leinster into a narrow 6-5 lead before Scotland international Chris Paterson made amends for his earlier missed conversion with a 23rd minute penalty.

A 26th minute penalty from Nacewa made it 9-8 to Leinster – a lead which they held on to at half time. With Andrew Conway and Eoin O’Malley catching the eye out wide and Ian Madigan displaying steady composure at half back with Paul O’Donohoe it was inevitable that Leinster would extend their lead.

And in the 46th minute Conway struck after a wonderful offload from Hines. Nacewa again slotted home the conversion to make it 16-8 for the hosts. But a Paterson penalty reduced the deficit and though Nacewa would strike again in the 51st minute, Paterson’s try seven minutes later, which he also converted, ensured a gripping finale.

But credit to Leinster who held on to seal a fine victory in front of a large vocal crowd of 16,786.