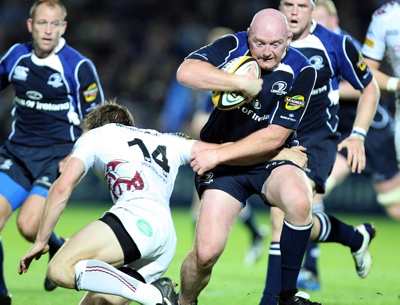 Speaking after the game Leinster Coach Michael Cheika said: “Considering we were able to get a couple of our younger guys out there to get a taste of the action, we stayed composed and defended well and that’s something you need going down the road.

“They’re a quality side. We made a couple of mistakes, but with the amount of ball I thought we defended quite well. I would have liked one more (try). I thought we deserved one more. But the try in the first half was a quality piece of work. It was one opportunity that came our way that we took.”

Wales out-half James Hook kicked his side into a 21st minute lead with a drop goal before Luke fitzgerald grabbed his fourth try in two games with a well-worked move involving the dynamic Brian O’Driscoll and some excellent work by Felipe Contepomi down the touch line who one-twoed with the young back who rushed in to score three minutes later.

Contepomi added the points to give the hosts a 7-3 lead.

Hook added a penalty on 28 minutes to reduce the lead to 7-6 at the interval.

Contepomi added two penalties on 54 and 75 minutes before successive drop goals by Isa Nacewa pushed the hosts into a strong position. Nikki Walked snatched an injury time try, which Hook converted, to reduce the lead to six points. But the hosts hung on to seal a 19-13 victory in front of 15,140 supporters.