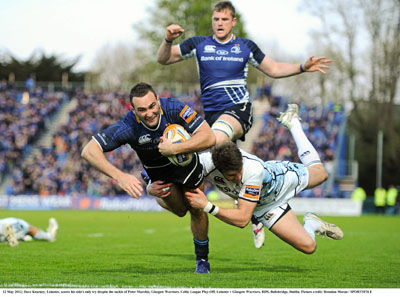 David Kearney dived over for the province’s only try after 66 minutes to tee up a title decider against the Ospreys at the RDS on Sunday, May 27 (kick-off 4pm).

It is a repeat of the 2010 final which the Ospreys won, and for Leinster it could be the second leg of a league and European double in two weeks’ time.

It was a first half of precious few scoring chances, with Glasgow defending manfully and keeping Leinster to just three penalties from Jonathan Sexton.

Duncan Weir chipped in with one for the Warriors, leaving them well in the hunt at the break at 9-3 down.

Both kickers suffered misses before Sexton added to Leinster’s tally and then Kearney was sent over for what was effectively the match-winning score.

Glasgow hit back with a late brace of tries from Dougie Hall and Stuart Hogg, but the damage had been done and Joe Schmidt’s side march on.

Speaking afterwards, Leinster head coach Joe Schmidt said: “I was delighted with the effort and the endeavour. We certainly didn’t hold back, I thought we defended really well for the 70 minutes until we got enough of a buffer and then we relaxed a little bit knowing that we had the game.

“Credit to Glasgow that they came back a little bit. On attack it was a really frustrating night.

“I think we got some nice line-breaks early on and didn’t look after the ball particularly well which was very frustrating. I know talking to the players post-match that there was a lot of frustration around the breakdown.”

The Warriors were fiercely determined to become the first Scottish club to reach the league final, and they did manage to lower Leinster’s colours at the RDS in September.

The hosts exerted the early control in this semi-final clash, retaining possession through a series of rucks before Sexton slotted a seventh minute penalty.

Glasgow were level only two minutes later thanks to a pinpoint kick from Weir, and the visitors drew encouragement from their rugged defence with their scrum also shaping up well.

Sean Lineen’s men made Leinster work hard for any territory and Richardt Strauss was penalised for not releasing close to the Glasgow try-line.

Shortly afterwards Sexton restored the hosts’ lead with a left-sided penalty from just outside the 22, and a clever kick chase from Isa Nacewa drew the crowd’s approval.

After an earlier warning, Alex Dunbar was dispatched to the sin-bin in the 28th minute for blatantly coming in at the side of a ruck five metres from his line.

Federico Aramburu knocked on when trying to intercept a Leinster pass as Glasgow dug their heels in, successfully surviving some hairy moments in their 22.

Fergus McFadden and Cian Healy both went close to breaking the try deadlock before Weir lifted the siege by launching turnover ball downfield.

Back came Leinster though and they gleaned three points from their numerical advantage courtesy of a 38th minute strike from Sexton.

Weir missed a chance to open the scoring in the second half, pushing a difficult penalty from distance to the right and wide.

The game remained tight and tense and Leinster were forced into their second change at centre with the limping O’Malley joining a bloodied D’Arcy on the sidelines.

Weir was off target with a penalty attempt from the left and a powerful Leinster scrum robbed Glasgow of possession and a promising position in the home 22.

Despite a penalty miss from Sexton, Leinster turned the screw around the hour mark with Brad Thorn and Shane Jennings ensuring quick ruck ball for them.

Normal service was resumed when Sexton popped over his fourth penalty for a 12-3 scoreline and a rare chink in the Glasgow rearguard allowed Kearney to grab that all-important try.

Jennings put Nacewa through on a diagonal run and he passed for Kearney to make it over in the left corner. Sexton added the extras from the touchline to heighten the blow for Glasgow.

The Warriors showed no signs of wilting though and after Andrew Conway had a try ruled out for an earlier infringement, the Scots closed the gap.

The ball was spun wide for replacement hooker Hall to crash over in the right corner and in injury-time, Ruaridh Jackson’s neat grubber kick was gobbled up by Hogg for a second consolation score.