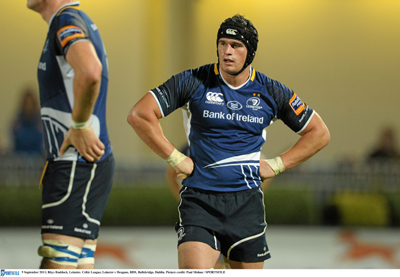 Speaking after the game, Leinster Coach Joe Schmidt said: “Yeah we are gutted. That is an incredibly frustrating night for us at the office. The injuries are continuing to mount, I think losing Dominic Ryan and Kevin McLaughlin and Luke Fitzgerald coming off, we really are struggling for numbers.

“A couple of young guys got a boost tonight, young Jordi Murphy, I guess we’ll see a little bit more of them in the near future. It doesn’t look good for the two boys who went down. We are going to have to wait over the next 48 hours to get scans and get the feedback on both himself and Kevin.

“The result is really tough to take. I thought we played a lot of good footie to be honest and I know it doesn’t look good on the scoreboard, but there was a lot of frustration around the ruck area and I am pretty disappointed.”

A brace of penalties from Isa Nacewa after 2 and 19 minutes edged the hosts 6-0 in front before Glasgow out-half Scott Wight reduced the deficit with a 21st minute penalty.

Luke Fitzgerald, starting at centre for the second time in three games, made several impressive breaks while Devin Toner carried well in the opening exchanges. With Cillian Willis sniping for territory seemingly at every available opportunity Leinster came close to scoring around the 18 minute mark but they had to settle for their second penalty.

It was Glasgow who scored the first try of the game when second row Nick Campbell broke free to touch down and Wight added the extras on 29 minutes to push the Scots into a 10-6 lead.

Seven minutes later Leinster regained the lead though when Ian Madigan capitalised on a fine move involving Willis, David Kearney and a Dominic Ryan assist to touch down at the North end of the ground.

Nacewa added the extras to give Leinster a 13-10 lead which they took with them into the half-time interval.

Leinster were dealt a blow five minutes into the second half when Dominic Ryan left the field with an ankle injury soon after a Duncan Weir penalty, but the Blues managed to secure and execute two further penalties through Nacewa to make the score 19-13 after 51 minutes.

But the Warriors fought back and a second Weir penalty and a 53rd minute Stuart Hogg try pushed them back into a slender one point lead before Weir struck in the 65th minute to give them a 23-19 lead which they withstood until the end despite late pressure from Leinster.