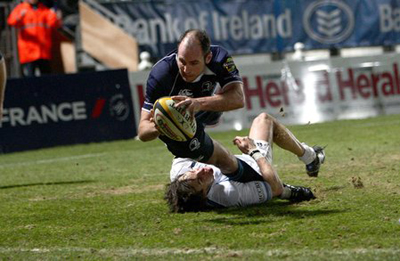 Speaking after the game Leinster Coach Michael Cheika said: "It didn’t look like a top four game in stages and we know that at times we didn’t play well, but I’m really proud of the guys’ effort tonight. There were half a dozen or so players out there at the end who were making either their first or second appearances for the province and they did really well.

"We showed a lot of character and our defensive scramble was very effective which was pleasing. It was a very important win in the context of how we manage our season. We’re making a bigger commitment than ever with nine players involved with Ireland in the Six Nations, so it’s a big bonus for us to be on top of the league with a game in hand over some of our opponents."

The game lacked any real fluency and the early exchanges were dominated by spells of forward play, and it took a fourth minute penalty from Fergus McFadden to separate the sides, but the game sprung into life in the 16th minute when Hefin O’Hare raced through the Leinster midfield and sprinted into score. Ruaridh Jackson added the conversion and the 7-3 deficit sparked the hosts into life.

The impressive McFadden added a penalty on 19 minutes before a superb break from Bank of Ireland Man of the Match Isa Nacewa three minutes later found the Ireland ‘A’ star who raced in to score under the posts. He added the points and there ensued a spell of Leinster pressure. Malcolm O’Kelly and replacement debutant Eoin Sheriff were particularly effective during this spell, while scrum-half Paul O’Donohoe sniped and linked superbly all night.

Eventually in injury time the hosts were rewarded when an initial break from skipper Bernard Jackman found O’Donohoe who passed the ball out wide for Girvan Dempsey to touch down in the corner. McFadden again stepped up to give Leinster a deserved 20-7 half time lead.

Credit to the Warriors who fought back in the second half and replacement Colin Gregor’s try and conversion in the 78th minute ensured a tense finale, but Leinster held on to extend their lead at the top of the table to four points.